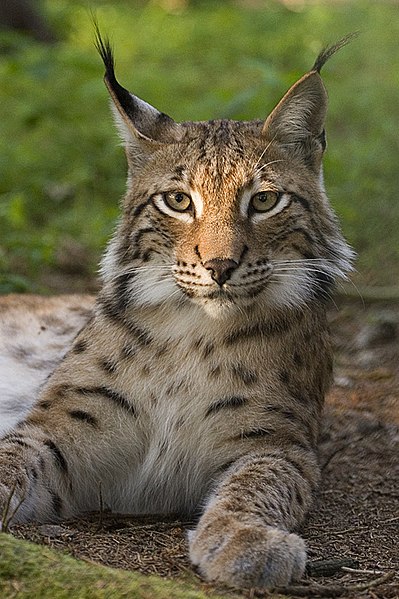 The Eurasian Lynx is a distinctive species of wild cat that was common in the Alps until the 19th century. Together with the grey wolf and the brown bear, it was one of the three big predators that were intentionally eradicated across much of Europe during the course of the 1800s. However, a successful reintroduction programme in the 1970s has resulted in scattered, small populations now observed living across the French, Swiss and Italian Alps.

Eurasian lynx range in size from 18kg to 34kg. They stand 50-65cm at the shoulder, with a body length of 70-130cm. Males are generally larger and heavier than females. Their coat is varied in colour and pattern. They can be grey, reddish-brown or yellow, with or without spots or stripes. Their distinguishing features are a short, bobbed, black-tipped tail, black tufts of hair on their ears, and flared facial ruff.

They are solitary animals and only come together during the mating season, from February to April. The female gives birth to 2-3 cubs after a gestation period of 67-74 days. The cubs are born blind and deaf, and spend their first few weeks in a secluded den built by their mother. They are totally dependent on her for the first couple of months of life. However, they grow quickly and are independent after around 10 months.

They live in a variety of habitats, including thick forests and rocky mountains. They are most active in the evening and early morning and tend to spend the daylight hours sleeping concealed in undergrowth or caves. Lynx are territorial, and each adult lynx will have its own home territory. Female territories tend to be in the range of 100-200km, while male territories are larger, in the region of 240-280 km. Territory size is inversely proportional to prey availability, where prey are more numerous, territory sizes are usually smaller.

Lynx are strict carnivores, eating only meat. In the Alps, their preferred prey are roe deer, musk deer and chamois. However, they will also hunt foxes, rabbits, rodents, sheep and birds where larger animals are unavailable. They are ambush hunters and stalk their prey silently, before pouncing and killing them either with a bite to the neck or by biting down on the snout and suffocating the animal. Lynx can kill prey 3-4 times their own size. Any meat that is not immediately eaten is cached for later.

In the French Alps, lynx often inhabit the same areas as the grey wolf. As long as prey is not scarce, the two tend to co-exist, showing neither avoidance nor attraction behaviours. This is thought to be due to the difference in prey selection – the grey wolf preference is for larger red deer, while the lynx favours the smaller roe deer. However, where prey is scarce, there is evidence that grey wolves will also hunt lynx, both to eat and in order to reduce the competition for food. 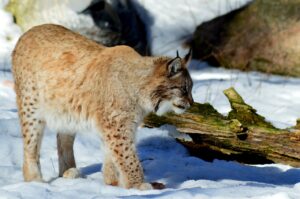 The paws of the lynx are very well-adapted for walking in deep snow. Their paws are large, webbed and covered in fur on the underside. Their large size and webbing create a snowshoe effect and stops the lynx from sinking into the snow. Meanwhile, fur covering on pads helps to maintain traction.

It is less clear what purpose (if any) their bobbed tail and dark ear tuft adaptations serve. It has been suggested that the ear tufts may enhance their hearing, although this has not been proven. One theory for their short tails is that lynx have little need for a longer tail. Since they spend much of their time on the ground and climb relatively little, they don’t need the balance that a tail provides. In addition, their ambush-style hunting strategy doesn’t rely on long chases, where a tail would provide a ‘rudder’ effect.

However, this theory isn’t entirely satisfactory. Other cats, such as tigers, have tails that don’t appear to be particularly beneficial. Meanwhile, gibbons spend much of their life climbing trees and have no tail at all. Perhaps instead the lynx’s short tail was simply the result of a natural and neutral gene mutation, like that of the Manx cat, and perhaps this ended up being the dominant form purely by chance.

Along with the grey wolf and the brown bear, lynx populations across Europe have declined over time as human populations expanded. These large predators were seen as a threat to both people and livestock, and their eradication was often an objective in agricultural societies. In addition, the expansion of farming resulted in a reduction in their natural habitat, meaning they had fewer places to hide.

By the 1800s lowland lynx populations had all but disappeared. Within central Europe, the only remaining populations were in the mountains of the Pyrenees, Alps and Massif Central. By 1930 even these individuals had disappeared.

Since the 1900s, governments across the Alps have passed legislation to limit the impact of human farming on the natural Alpine environment and provide protection to the native animals. A small reintroduction programme in the 1970s released 8-10 lynx from the Carpathian Mountains into the Jura Mountains. No research programme accompanied the release, and so the numbers were not subsequently monitored. However, in the last few years, lynx sightings have become more frequent. One such sighting in Chartreuse made the local newspaper in March 2020 [1].

One of the most interesting myths associated with the lynx is that their urine solidifies and transforms into a gemstone. This gemstone, called lyngurium, was first described by the ancient philosopher Theophrastus (c.370 BC – c. 287 BC) in his scientific work De Lapidibus (‘On Stones’). He described it as being cold, hard and clear, with the ability to attract other objects including straw, leaves and thin pieces of copper. In his work, he claimed that male lynx produced superior lyngurium to female lynx and that the stones of a wild lynx were better than those of a tame one.

Despite no examples of this stone ever having been recorded, belief in the gem persisted up until the seventeenth century. The story of lyngurium is repeated over and over in medieval lapidaries, all evidence for its existence seemingly coming down to the report by Theophrastus. However, by the mid-seventeenth century, authors such as de Laet and de Boot had started to dispute the existence of lyngurium, and the name slowly died out.

Lynx are still incredibly rare in the Alps. Their elusive nature and low numbers make it a very difficult animal to spot in the wild. In our next blog, we will be looking at an altogether more common and easily-spotted animal native to the Ecrins: the European Green Lizard.