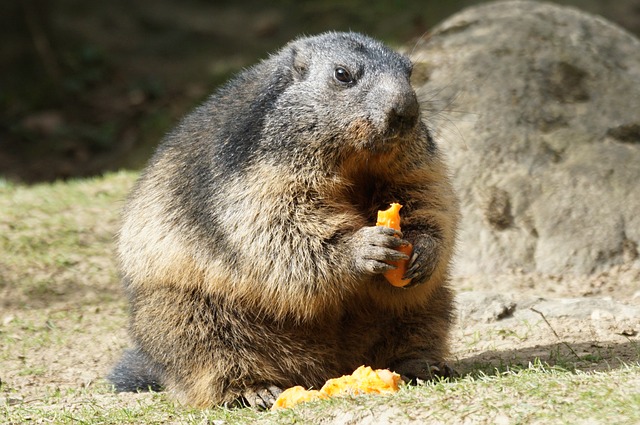 These large, ground-dwelling squirrels are a symbol of the Alps and other mountain ranges. They are easy to recognise from their cute, cuddly appearance, but how much do you know about everybody’s favourite mountain rodent?

There are fourteen different living species of marmot

Four extinct species have also been identified in the fossil record. The alpine marmot (Marmota marmota) is only found in Europe and is the only marmot you will see in the Alps.  Marmot species found in North American mountains include the hoary marmot (Marmota caligata) and yellow-bellied marmot (Marmota flaviventris). Not all marmots live in the mountains. The groundhog (Marmota monax) is one of the lowland dwelling marmots.

Alpine marmots have their own marmot language

Marmots are recognisable by their shrill, whistling alarm calls. The alpine marmot uses a different call depending on the type of threat. A single, piercing whistle warns against a predator in the air – often an eagle. A series of whistles denotes danger on the ground. Studies of North American marmot species have not found the same correlation between threat type and alarm call.

They are monogamous and live in families

Marmots live in family groups with a distinct hierarchy. Each family is headed by a dominant male and female marmot, and only this couple are permitted to mate each year. The dominant female ensures that this rule is kept to. The family has its own burrow which might be enlarged over successive generations until it becomes a complicated warren. All the marmots sleep together in the main sleeping chamber, the hibernaculum.

But sometimes they cheat

Different DNA studies have found that between 2.2% and 13% of marmot offspring have a father other than the dominant male, with young from the same litter sometimes having more than one father.

The families live in marmot colonies

Marmot families live together in a colony. Within the colony, each family has its own territory. Despite being neighbours, interactions between the families are limited and often hostile. Individuals in the family use the scent of their faeces to mark out the boundaries of their territory. In this way, it is clear which territory belongs to which group.

Marmots hibernate for around two hundred days per year, losing around a third of their body mass. During this period, they live off their reserves of fat. They do not sleep constantly but have short periods of wakefulness which are believed to help regulate their body temperatures. Newborn marmots spend the first months of their life racing to eat enough to survive their first hibernation.

Whistler was named after its marmots

Marmots are often known as whistlepigs or whistlers in Canada, due to their distinctive calls. The ski area of Whistler was re-named after the marmots which live there. The original name was London Mountain, due to the rainy, foggy climate. When it was developed as a resort, people considered the new name more attractive to tourists.

Marmots have been used since ancient times to find gold

2500 years ago, Herodotus, the ancient Greek historian, wrote about large golden ‘ants’, bigger than foxes, which were used to find gold in the ancient Persian empire. Long dismissed as a fabrication, research from the mid-1990s suggests that Herodotus’s ants were golden marmots in what is now Pakistan. The ancient Persian word for marmot means mountain ant. The marmots there burrow in sandy, gold-bearing soil, collecting it on their fur. Historians now believe that the tribesmen used to extract gold from this sand that the marmots carried to the surface.

Category: All about the Alps, Alpine Wildlife      Tags: Marmots, Wildlife