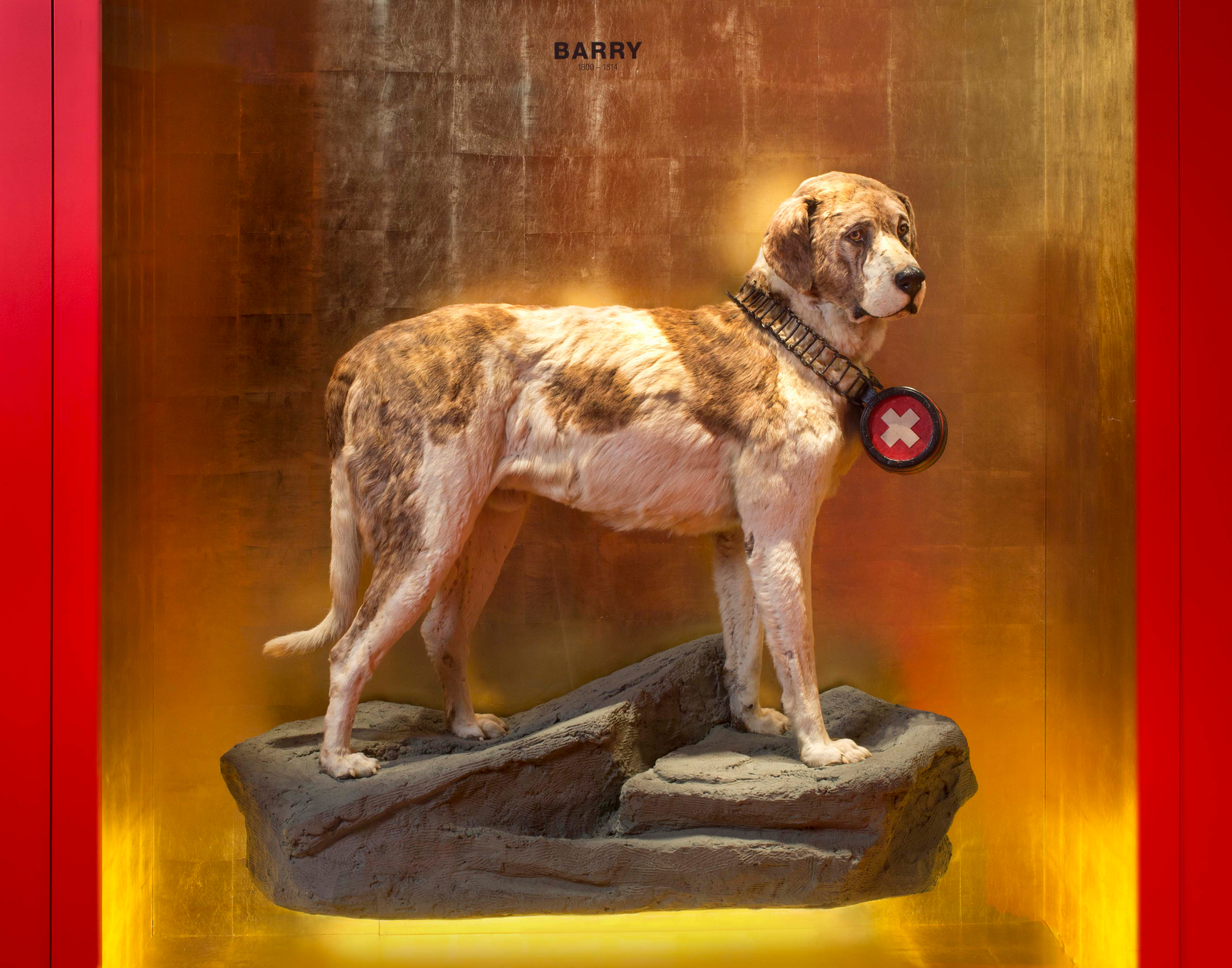 How a St. Bernard named Barry became a Swiss legend

Although relatively unheard of outside his native Switzerland, Barry is known as the most famous dog in the country to the Swiss. In German, he is called Barry der Menschenretter, or “Barry the people rescuer”. He was born in the year 1800 at the Great St. Bernard Hospice on the 2469-metre-high Grand St. Bernard pass, which connects Switzerland and Italy. At the time, the St. Bernard breed had yet to be formally recognised, and he might have been known as an Alpine mastiff. Later on, these dogs came to be named for the St. Bernard pass where they lived and worked. For those unfamiliar with his story, here are the legends and the facts told around Barry the avalanche rescue dog.

The St. Bernard Hospice and Monastery

The Hospice has welcomed travellers crossing the St. Bernard pass for almost a thousand years, since it was founded in 1050 by Saint Bernard of Menthon. Originally it was used by devout French and Germans making the pilgrimage to Rome. These days it is more likely to accommodate ski tourers and tourists than pilgrims, but it is still run by Augustinian monks as it was in St. Bernard’s day.

Sometime in the seventeenth century, the monks started to keep dogs at the pass in order to assist with rescues. Searching for lost travellers has long been part of the job for these mountain monks. Various breeds were probably used at first, but over time the dogs were bred for their strength and hardiness, producing the famous St. Bernard dogs we know today.

Barry himself was an ancestor to the modern St. Bernard, but the breed had not yet reached the size of the dogs we are familiar with. He weighed around 45 kilos while an adult St. Bernard today can reach 80 to 130 kilograms. Over time the dogs were bred to be heavier and stronger so that they were better able to assist with rescues. Ironically, with the advent of helicopter rescue services, lighter dogs such as collies are preferred for avalanche rescue duties and St. Bernards are now considered too heavy.

Many stories surround the life of Barry, some certainly legendary. He is reputed to have saved at least forty lives over a twelve-year career. Most famously, he rescued a boy he found asleep in a cave of ice. The story goes that Barry warmed the boy by licking him, then carried him back to the hospice on his back. Legends of Barry tell of a dog that worked alone, going out into the snow and dragging back avalanche victims after digging them out. Only when a rescue proved too much for him would he alert the monks who would come to help. In reality it seems likely that the avalanche dogs of the time accompanied the monks as they patrolled the paths around the pass looking for travellers in difficulty.

In popular legend, Barry was killed during his forty-first rescue. As the story goes, he was trying to revive an unconscious soldier of Napoleon’s army. Suddenly, the man awoke. Mistaking Barry for a wolf he stabbed him with a bayonet. The memorial to Barry at the Asnières-sur-Seine dog cemetery in Paris alludes to this story. The French inscription states, “He saved the lives of 40 people… and was killed by the 41st!”

The true story is less dramatic. After twelve years of hard work, Barry retired and spent his final two years living peacefully in Bern, the Swiss capital. Following his death, his taxidermically preserved body was displayed at the Natural History Museum in Bern, where it can still be seen.

The tradition of the barrel of brandy that St. Bernards carry around their neck probably started with Barry too, even though this almost certainly never happened. Several nineteenth century writers repeated the story of the barrel of rum or brandy carried to provide warmth for freezing travellers. Barry’s exhibit in the Natural History Museum has worn a barrel around his neck for most of the two hundred years it has been on display. Occasionally a museum director has removed it for authenticity reasons, but tradition has always won out over facts and the barrel replaced.

Owners of certain Swiss avalanche transceivers might have wondered where the name Barryvox came from. The original Barryvox transceivers were developed for the Swiss Army at the end of the 1960s by engineers at Autophon AG, lead by Hans van der Floe.

The name Barryvox means “voice of Barry”, and comes from the idea that the bleeping tone of the device was like Barry’s bark as he approached a casualty, letting them know that help was coming. Modern transceivers made by Swiss brand Mammut still bear the Barryvox name.

The St Bernard Hospice is as popular as ever with ski tourers and snowshoers in winter, or hikers and cyclists in summer. It lies on variations of the skiers’ Haute Route, and on the road-cyclists’ Tour de Mont Blanc. It is a beautiful location, lying next to a lake just a few metres from the Italian border. A night at the hospice is a unique experience where you can expect a warm welcome from the monks.

The St. Bernard dogs no longer live at the hospice year-round, although a few are kept there during the summer months and there is a museum dedicated to them. Most of the dogs moved to the Barry Foundation in nearby Martigny in 2004. The foundation also operates the Barryland museum in the town.

The featured image at the head of the page shows Barry on display at the Natural History Museum in Bern. Photo credit: PraktikantinNMBE, CC BY-SA 4.0, via Wikimedia Commons.