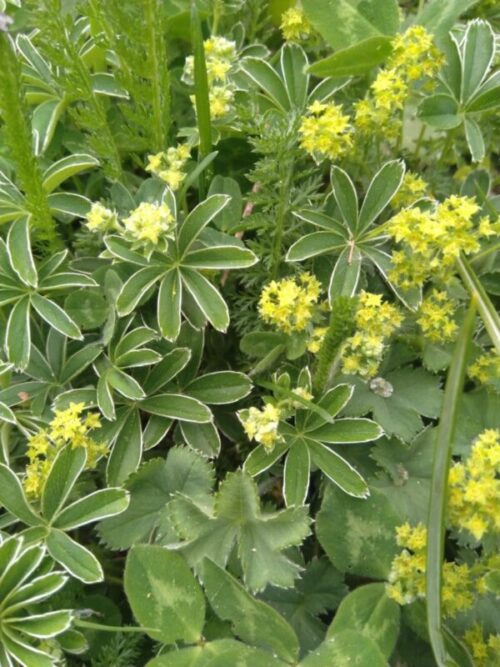 The lime green flowers may lack the showiness of more colourful flowers, but they are nonetheless delicate and beautiful in their own way when seen up close. The leaves are more fascinating to look at, being quite distinctive to the genus. Most species have fan-shaped, scalloped leaves with between five and eleven shallow lobes. The alpine version has separated, elongated leaflets, edged in white. In my opinion, these delicate leaves are much more aesthetically pleasing than the standard version. Several alternate names for the Alchemilla plant derive from the shape of the leaves. These include nine hooks, bear’s foot and lion’s foot.  Lion’s foot gave the mediaeval Latin name, Leontopodium. The name lady’s mantle first appeared in the German form, Frauenmantle in Jerome Bock’s History of Plants, published in 1532.

The scalloped leaves often hold a shimmering droplet of water. After rain, water will bead on the leaves rather than running off, in the same way that rainwater beads on the surface of a new waterproof jacket. The folds in the leaf hold these droplets in place like a tiny cup. However, their water management is more impressive than this. The leaves can actually excrete excess water through transpiration. It is possible to see new droplets of water on the leaves, even when it hasn’t rained. Another folk name from the plant is dewcup, a reference to the water collected by the plants in this fashion.

This water, sitting in spherical globules in the leaves, is the reason behind the Alchemilla genus name. In the past, it was collected by alchemists who prized its supposed purity and magical properties. The water was used as part of the process to attempt to transform base metals into gold. Given the small amount of water produced by each leaf, collecting it must have been a laborious process even with the promise of riches to come.

The other main part of lady’s mantle’s fame comes from its many uses in herbal medicine. It is usually taken as a herbal tea made from the leaves, although all parts of the plant have been used medicinally. Many of the uses are for treating women’s complaints, such as easing period pains, pregnancy or menopause. It has been suggested that the common name comes from this usage. However, the name is also said to derive from the leaves resembling a cloak worn by the virgin Mary.

The plant has a wide range of other uses in herbal medicine. Consumed in a tea, it was used as a sedative and anti-bacterial. The leaves and flowers were applied directly to wounds and bruises to promote healing. It was highly regarded for both internal and external use to treat bleeding, bruises, vomiting, convulsions and disturbed sleep.

Most of these uses belong in the medical history books, but lady’s mantle tea is still popular today, especially for regulating menstruation.

Next time you are out hiking, look out for these discreet but fascinating plants. And when you do see them, stop for a closer look. I love to think about the troves of folklore hidden in those lobed leaves.

Category: All about the Alps, Alpine Flora