White Marmotte was started by Ian Huyton and a love of mountains. From our base in Chamonix, we run courses and trips across the Alps. These include guided treks and ski touring, as well as mountain & navigation skills courses for walkers and skiers. We also run ski instructor training courses in both summer and winter.

Ian started climbing at the age of 5, and got his first pair of skis when he was 7. After a degree in physics, 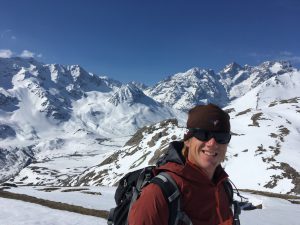 he decided that he really belonged in the mountains, and set about qualifying as a ski instructor.

His teaching career began at Nevis Range in the Scottish Highlands back in 2004. Since then he has taught skiing on three continents before settling in France.

He achieved his International Mountain Leader Qualification in 2017, and has guided groups around many European long-distance treks. These include Tour du Mont Blanc and the Haute Route. When not working or playing in the mountains, he writes for 2alpesnet.com and other websites.

He also has a degree in physics, but that was a long time ago.

White Marmotee / Ian Huyton is a registered Tour Operator with the French Tourism Development agency, Atout France. This allows us to offer multi-day packages with accommodation that comply with the European package travel regulations which are incorporated into the French Code du Tourisme.

Jump to our friends and partners

Our Playgrounds – the Chamonix Valley

The Chamonix Valley needs no introduction to mountaineers as the birthplace of alpinism at the foot of the highest mountain in the Alps (Mont-Blanc, for those not in the know). Skiers will know it as the site of the famous Valley Blanche – the biggest lift served vertical drop in the world. This is indeed a must-do run for competent off-piste skiers, but there is so much more to skiing in and around Chamonix, especially once you put on touring skins and start hiking.

In summer, Chamonix is the starting point for two of the most famous long distance hikes in Europe – the Tour de Mont Blanc and the Haute Route. One bonus here is the close proximity to both Switzerland and Italy. This lets us hike easily across national borders giving the trekking here a uniquely international flavour. Another bonus is the network of accommodation both in the surrounding valleys and in the mountains themselves.

We offer ski lessons in Chamonix and neighbouring resorts in conjunction with Freedom Snowsports. In summer we run guided trekking and navigation courses from the Chamonix Valley.

Our Playgrounds – the Ecrins National Park 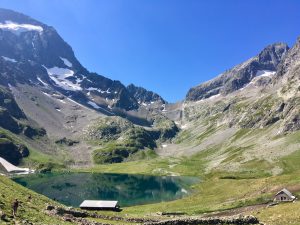 In the Southern French Alps lies a mountain paradise to rival the most popular areas of the Alps. The Ecrins region hosts wild and beautiful hiking, sun-kissed rock climbing, classic Alpine mountaineering and world-class ski resorts. Villages like La Berarde, La Grave and Ailefroide are woven into the fabric of mountaineering history. Alongside these renowned names, there are many more picturesque and unspoilt villages to discover.

The range holds the only 4000m peaks in France outside the Mont-Blanc massif. Back in the golden age of Alpinism, many famous climbers of the day journeyed here to scale them. But the biggest prize, La Meije, held out until 1877. This was one of the last great Alpine peaks to be conquered. At the foot of these high peaks, the Briancon area is celebrated for rock climbing on warm limestone. There is actually good rock climbing all around the range, but the Brianconnais crags provide the highest concentration of easily accessible sport climbs.

For our summer courses and trekking, perhaps the best thing about this area is the lack of crowds. Aside from certain tourist hotspots, the trails here tend to be empty. There are hundreds of kilometres of trails here where you will rarely see another hiker. As a result, the opportunities to spot the local wildlife are multiplied.

Skiing in the Ecrins 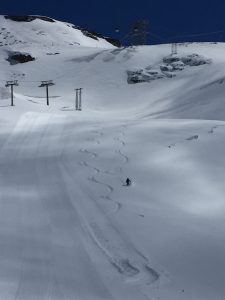 Les Deux Alpes lies in a beautiful corner of the world with a lot to offer anybody who loves the mountains. The town is perched on a high plateau on the edge of the Ecrins National Park. On the pistes, a vertical drop of over two kilometres can be skied from 3520m on La Lauze down to 1294m in Mont de Lans. The resort is often described as being ‘upside down’ due to having some of the easiest terrain at the top. Steep lower slopes hold challenging black runs (plus the brand new Jandri 1 blue) while above 3200m the glacier hosts cruising blues with a spectacular view.

In summer the glacier draws international athletes from around the world to train on guaranteed snow while the lower slopes turn into a downhill mountain biking paradise. Beyond the lift served area there is easy access (perhaps too easy) to the wild high mountains and glaciers that the region has to offer.

Geographically, the ski area forms part of a long, broad ridge which rises from Bourg d’Oisans to the peaks of Le Rateau and La Meije, separating the Upper Romanche and Veneon valleys. This terrain gives a wide selection of long and involved off-piste routes and ski tours which take you from the high reaches of the ski area to the remote tributary valleys and picturesque villages of the Veneon or to the steep north facing slopes of the Romanche. 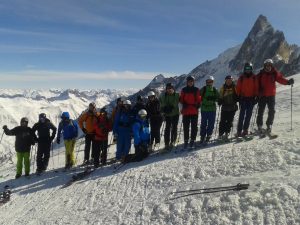 Aside from Les Deux Alpes itself, there are several other ski areas close by ranging from the enormous to a pair of lifts in a field. This is a region where tiny, unspoilt ski stations like Chazelet and Col D’Ornon stand alongside the world-class resorts of Alpe D’Huez and Serre Chevalier.

For some, the biggest draw in the region is the freeski mecca of La Grave La Meije. The Telepherique runs from the village at 1450m to the glacier at 3200m giving access to a huge playground of ungroomed and unpatrolled off-piste terrain. Above that, a unique drag lift on the Girose glacier takes skiers to 3600m and the tenuous link to Les Deux Alpes. Avalanche safety equipment is essential and an off-piste instructor or mountain guide is highly recommended. There are many dead ends here. Consequently, following tracks can easily get you into trouble in an area with a large population of extreme skiers. That said, it is a truly amazing place to ski and a descent of the Vallons de la Meije should be on every skier’s must-do list.

Ride Camps is the brand name British instructor Craig Nelder uses for his Snowboard/Mountain Bike experiences and coaching products. All products are offered in and around the stunning French resort of Les Deux Alpes.

Craig’s goal is to help you get the most enjoyment and satisfaction from your mountain riding sports and to help you reach your full potential! He can work with both adults or children of all levels from complete beginner all the way up to training and qualifying new instructors.