Tales of the Alps: L’Escalade, Geneva 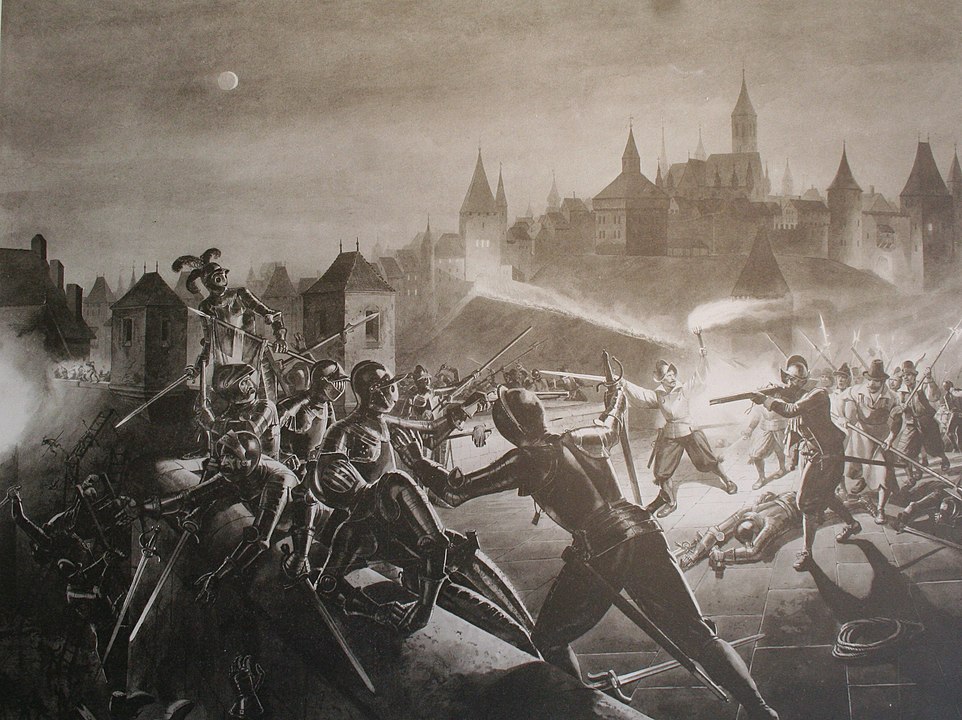 In this series, we look at some of the more interesting tales of the Alpine region. Some, like the battle of the ‘Escalade’, are true. Others have their origins in myths and legends. This is the story of how a sixty-year-old woman and a pot of vegetable soup saved Geneva. The tale is familiar to the city’s inhabitants, who celebrate it each December. Outside Switzerland however, the events are less well known.

Today, Swiss Geneva is a thriving international city. Neighbouring Savoie, or Savoy in English, is a mountainous region of France that has twice hosted the Olympic Games. Thousands of people travel daily between the two, and relations are generally cordial. Four hundred years ago, things were very different. Republican Geneva was a walled, independent, Protestant city-state. The Duchy of Savoy was staunchly Catholic, and still two and a half centuries away from becoming a part of France. Charles Emmanuel I, Duke of Savoy, came to the throne of the region in 1580 with a burning desire to turn Geneva into his Catholic capital. Twelve years later, he decided to make this happen.

In the early hours of December 12th, 1602, two thousand Savoyarde soldiers assembled outside Geneva’s city walls. After marching down the Arve valley, crack troops crept up to the city carrying ladders. The plan was for a small number of men to scale the walls and enter the city. These men would silently open the city gates to let the bulk of the army into the town. The name given to the episode, the Escalade, comes from the French word for ‘climb’. Quietly placing their ladders against the walls close to the gates, the Savoyards began their ascent.

Meanwhile, according to legend, Madame Catherine Royaume was up late. She bustled around her kitchen, tending to a simmering cauldron, or ‘marmite’, of vegetable soup over the fire. Her husband Pierre was an engraver of coins and the family lived just above the La Monnaie gate. The couple were both around 60 at the time and had moved to Geneva twenty years earlier. At that time, they had come to the city as refugees from Lyon, to escape the French persecution of Protestants.

Hearing noises outside, Madame Royaume looked out to see Savoyarde soldiers climbing the wall. Without stopping to think, she picked up the bubbling vessel of soup, carried it to the window and threw it at the nearest soldier. The cauldron bounced off his head, killing him instantly. As he fell lifeless to the ground, the ensuing commotion roused the city guards. Catherine Royaume is remembered today as Mere Royaume – Mother Kingdom in English – and celebrated as a heroine of the city.

The alarm was raised, bells were rung, and both civilians and the city militia raced to defend Geneva. Nightwatchman Isaac Mercier managed to cut the rope which opened the portcullis of the main gate, foiling the invaders’ plan to let the waiting army in. The climbing soldiers were repelled with cannon fire while the defenders fought in the streets against those who made it over the wall. Hearing the bells, both men and women of the city grabbed what weapons they could find. With some still wearing their nightclothes. they ran into the streets to join the battle.

A group of the attackers found themselves trapped between the inner and outer walls, searching for a way into the city itself. They concentrated on the Neuve and Monnaie gates, and the gated alleys that led beneath buildings. These alleys connected the city streets to the space between the walls. Finding the gates locked, they prepared to assail them with gunpowder charges. A second heroine of the city’s defence was Dame Jeanne Piaget, the young wife of a silk merchant.During the battle, it became clear that the locked alleyways were holding back the defenders as well as the invaders. Fortunately, Dame Piaget had a key to the alleyway gate beneath her building. Thinking quickly, she leant from her window and threw it to the militias below. The Genevans unlocked the gate and burst out of the alley, taking a group of invaders by surprise.

The defenders lost 18 men, against 54 dead amongst the attacking Savoyards. With their plan in tatters, the latter retreated. Besides those killed in battle, the Genevans captured thirteen prisoners. The city hangman held them until the morning then executed them as brigands. In a grisly warning, the heads of the 67 dead attackers were displayed on the city walls two days later.

After the battle, Geneva launched a counter-campaign against Savoie. Finally, following six months of skirmishes, both sides signed a lasting peace accord. Geneva would remain independent for the next few centuries. Over time, it became known as the ‘Protestant Rome’. Eventually, the city joined the Swiss Confederation in 1814. Across the border, Savoie changed hands numerous times before being incorporated into France in 1860.

Today, Genevans celebrate the Escalade festival every December. On the weekend nearest the 11th, Adults and schoolchildren take part in a range of traditional activities. The best known of these remembers Madame Royaume’s soup. Chocolate shops stock ‘marmites d’Escalade’ – chocolate cauldrons full of marzipan vegetables. Each year, Genevans head out to buy their marmite before the festival. Then, in homes around the city, the eldest and youngest smash the cauldrons to let the marzipan treats to spill out.  Other traditions involve mulled wine and fancy dress. In the city’s schools, children make vegetable soup. Since 1978, the Course d’Escalade race has also been held around the streets of Geneva. In this event, runners compete in a range of races covering multiple distances and age groups.