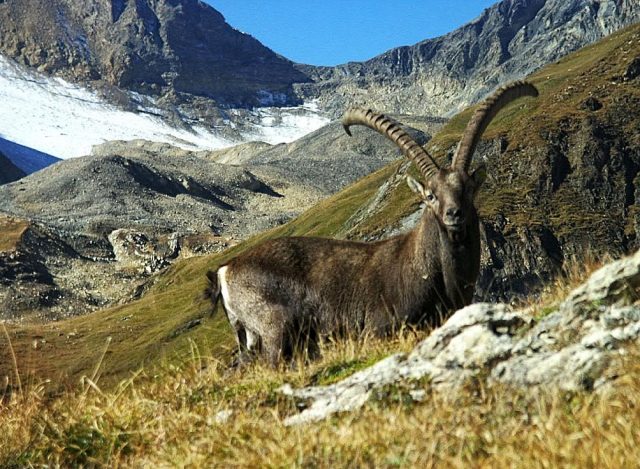 With its large curved horns and incredible climbing ability, the Alpine Ibex is one of the most instantly-recognisable animals in the Alps. Also known as the Steinbock or Bouquetin, this species of goat lives wild in the European Alps and can regularly be spotted on hikes in the Ecrins National Park.

Alpine Ibex display extreme sexual dimorphism, with females significantly smaller than males. Males grow to a height of 90-100 cm and can weigh anywhere between 70 kg and 117kg, while females generally weigh less than half of this and grow to a maximum of about 85 cm. Both sexes have backwards-curving horns. However, the male horns are far larger than those of the female, reaching up to nearly 100 cm. Female horns rarely exceed 35cm. Both males and females of the species have similar dull brownish-grey coats, with dark markings on the throat and chin, and a dark stripe running down the back. They are quite long-lived, and in the wild they can live to about 19 years.

Ibex have lived in the Alps for many thousands of years. In fact, images of the ibex have been depicted in some of the oldest cave paintings in the world. However, excessive hunting had nearly wiped the species out by the 1800s. It was prized both for its meat and for its use in traditional medicine. In addition, trophy hunters valued the beautiful horns of the males.

In 1821, a report on the near-extinction of the ibex prompted Charles-Felix, duke of Savoy and King of Sardinia to ban Ibex hunting on his estates of the Gran Paradiso. This was quickly extended to the entire kingdom, and in 1854 the Gran Paradiso was declared a protected hunting estate by King Victor Emmanuel II. With this protection in place, the animals thrived and increased in number. They naturally dispersed into the neighbouring Vanoise National Park, where they have since become the official emblem of the park. Since then, there have been several very successful reintroduction programmes to bring the animal to other areas of the Alps, and today, the Alpine population is thought to stand at around 30,000 individuals.

Alpine Ibex tend to inhabit steep, rocky ground between 1800m and 3300m. They are herbivores, feeding mainly on grasses, mosses, bushes and flowers. The low nutritional content of their diet means they need to spend a large part of each day feeding.

These are social animals and live together in herds. However, the herds segregate both sexually and spatially and they come together only during the breeding season in December and January. After this, they separate again. Females give birth to one or occasionally two kids, after a gestation period of around 167 days.

Female herds are generally larger than male herds, with around 20 females to a group, compared to 6-8 males. Social segregation may in part derive from the different behavioural characteristics of the sexes. Even from a young age, male and female of the species exhibit different preferences for play. Young females tend to avoid the rougher play of the young males, leading naturally to segregation.

In the summer, the male herds generally migrate to lower alpine pastures, to feed on the nutrient-rich new grass. Female herds, however, tend to stay closer to cliffs rather than follow the males to the open pastures. This is likely due to the cliffs providing greater protection for their young. Winter shows a greater spatial overlap of the herds, with both male and female herds moving to steep, rocky slopes.

Winter poses problems for many animals in terms of finding adequate food supplies. Smaller mammals often deal with this by hibernating. However, larger animals tend not to hibernate. It is thought that this is because their larger size makes them difficult to hide, and therefore more vulnerable to predators.

Ibex, in common with many other northern ungulates, are able to lower their metabolic rate in the winter. This considerably lowers their energy requirements, allowing them to get through the cold winter months with far less food. In fact, studies have shown very strong seasonal variation in their daily heart rates, with heart rates up to 60% lower in winter than in summer. In addition, they engage in ‘basking’ or sunbathing, similar to that done by reptiles, to further reduce their energy requirements.

Ibex are well-known for their exceptional climbing ability. They can quickly cover vast distances over tricky terrain when threatened and can jump nearly two meters straight up. In Piedmont and Lombardy, they can be observed climbing near-vertical dam walls to lick the salt from the stones.

They have several adaptations that allow them to climb with such remarkable skill. The most important of these is their special hoof design. The ibex hoof has two toes, which can move independently. The outer edge of each toe is comprised of the same hard keratin that makes up skin and nails, while the inner sole of the toe is soft and rubbery. The hard edges allow them to dig into tiny ledges in the rock, while the soft inner sole moulds to the surface. The fact that the toes can move independently gives them greater manoeuvrability over tricky surfaces, allowing them to use just one toe if the ledge is particularly narrow.

In the Alps, ibex have few predators. Until recently in many areas, they tended to die of old age, starvation or disease. However, that has changed in the last few years, with the introduction of wolves across much of the Alps. We will be taking a look at the wolf and its role in the Alpine environment in our next Alpine Wildlife blog post.

← Tales of the Alps – The Devil’s Bridge
TMB or Haute Route? →