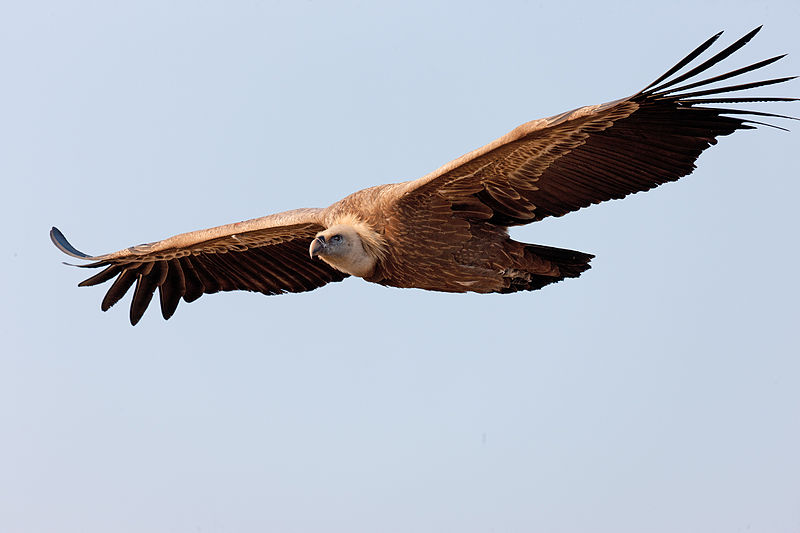 Following on from our series on Alpine Flower Notes, in this series we’ll be taking a look at some of the wildlife that can been seen in our region of the Alps, starting with the Griffon Vulture.

One of the most impressive birds of prey that can be spotted in the Southern Alps is the Griffon Vulture. These are now a relatively common sight in the more remote parts of the Ecrins National Park, thanks largely to a successful reintroduction programme, which began in in the 1970s. Prior to this, the breed had almost died out, with only a small population remaining in the Western Pyrenees. Reduction in habitat, changes in legislation preventing the disposal of carrion in fields, as well as deliberate poisoning all contributed to the near extinction of the species less than 50 years ago.

The Griffon Vulture is Europe’s second largest bird (the largest is the Bearded Vulture). It has a wingspan of 2.3-2.7m, and adults typically weigh 6-10.5kg. They live to about 25 years in the wild, although in captivity they have recorded lifespans of up to 41 years. While the female is generally slightly larger than the male, in common with other vultures there is no external difference in colouration between the sexes. They have a bald, whitish head and neck, a pale brown body and contrasting dark flight feathers.

Identification can sometimes cause a little confusion, particularly in telling the difference between the Griffon Vulture and the Bearded Vulture and Golden Eagle, all of which can be found in the area. Aside from the size difference, which can only really be judged on seeing them all together, the Griffon Vulture has distinct bi-coloured wings, while the Golden Eagle is dark brown/black and the Bearded Vulture is more of a rusty orange. They are also group animals, which neither of the other two are, so if you see more than two in a group, they are likely to be Griffon Vultures.

In order to find food, these birds often have to fly great distances in a single day. For birds of such a size, flying can be very energy intensive. To overcome this, the griffon vulture has evolved to predominantly glide and soar through the sky. This is a far more efficient way of flying than wing-flapping. They are experts at using updrafts and hot air thermals to gain altitude, before then gliding for many miles without needing to flap their wings. They are rarely seen in flight in the early morning. Instead they wait until the sun has heated the rock faces on which they perch overnight. These heated rocks then generate air thermals which the vultures can exploit for their flight.

Once in the sky, they locate their food sources by sight alone. Griffon vultures have a very poor sense of smell, however their eyesight is tremendous – they can see a 3 foot animal carcass from 4 miles away.

Griffon Vultures are monogamous and generally pair for life. They tend to nest in colonies along steep cliffs. The female usually produces only a single egg, between January and April, and both parents share incubation. Once the chick hatches, the parents continue to care for the young together, until it leaves the nest around 3 months after hatching.

They are almost exclusively carrion eaters, and rarely attack live prey. Their stomach acid is extremely corrosive, which allows them to eat diseased and decaying carrion. In fact, they can safely digest botulinum toxin and anthrax, which would be fatal to many other scavengers. It used to be thought that the long neck lack of feathers on the head and neck was another scavenger adaptation, allowing them to put their heads into corpses to feed without debris sticking to them. However, it has been shown that the head and neck also provide and important thermoregulating effect. When the bird is hot, sticking its head out allows it to cool down by exposing more skin to the air, while in colder temperatures it can pull its head down further into its feather-covered body.

In our next post in the Wildlife series, we’ll be looking at the Bearded Vulture, but in the meantime, if you have any comments or vulture sightings of your own, please let us know below!