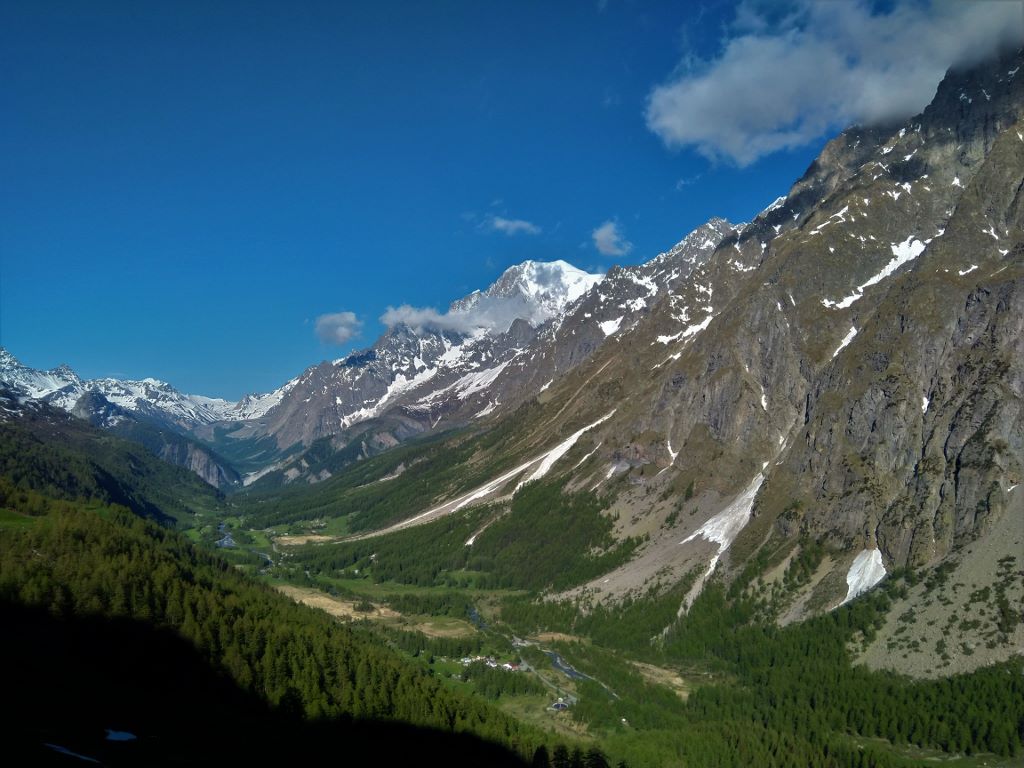 Which long-distance hike is for you?

Chamonix has long been a centre for mountain sports of all kinds, and this definitely includes long-distance trekking. Many hikes of all lengths pass through the valley, from a riverside stroll to a months-long traverse of the Alps.

Given ten days to a fortnight, there are two famous long-distance walks starting from Chamonix, the Tour de Mont Blanc and the Chamonix-Zermatt Haute Route. If you are thinking about embarking on one, you might want to consider how they compare.

The Tour de Mont Blanc, or TMB, makes a complete circuit around the Mont Blanc massif, most commonly with a start and finish point in the Chamonix valley. It passes through seven different valleys which surround Mont Blanc, and the mountain itself is visible for large parts of the route.

The Chamonix-Zermatt route is often called the Walker’s Haute Route to differentiate it from the higher altitude skiing or mountaineering Haute Route. It takes a route from the foot of Mont Blanc to the foot of the Matterhorn. This involves some sustained high-level sections and numerous Alpine passes and valleys.

Both routes have many variations and can be done in either direction. The TMB can also be started at any point on the route. Because of the numerous options, the distances and timings given below are approximate and depend on the actual route taken.

Among the famous long-distance walks of the European mountains, the Tour de Mont Blanc ranks as being reasonably accessible. The standard route only goes above 2500 metres three times – at the Col de Seigne, Grand Col Ferret and Brevent, and most days are around six hours’ walking time by Naismith’s rule. The totals of 170km and 10 000 metres climbing are impressive, but averaging 17km and 1000 metres per day is attainable for a moderately fit hiker. This is equivalent to climbing Snowdon or Scafell Pike from sea level each day.

Judged by the statistics, the Walkers’ Haute-Route appears only a little harder than the TMB. At 180km and 12 000m ascent, the daily averages are similar or slightly smaller if tackled over 12-14 days. However, the reality is that this is a much more difficult route. Although not the toughest trek in Europe, this is certainly up there as a challenge. A couple of easy days give a welcome respite, but you have to work harder for the rest of the route to make that total altitude. A succession of passes above 2800m ensure a physically demanding trek. Five of these are crammed into just two days, between Cabane de Mont Fort and Arolla. The technical difficulty is significantly harder than the TMB as well. Although the difficulties are not sustained, high crossings such as the Col des Chaux and the Pas de Chevres require concentration.

Both routes pass through idyllic mountain valleys with remote villages and long-established farms. You will experience traditional mountain cuisine and the heritage of the high Alpage. In these regions can feel like the way of life has not changed for decades.

The TMB passes through three countries, each with its own version of the Montagnard culture. French is spoken along most of the route, but you will normally spend around three days in Italy so Italian is useful as well. The Italians are justly proud of their espresso coffee, and a night in Courmayeur is an opportunity to sample authentic Italian cuisine.

The Haute Route also passes through mainly French-speaking regions. French is spoken as far as Zinal, nine or ten days in. From Gruben onwards the language is German. As on the TMB, the change in language is sudden. Many people in Zinal speak no German, while most in Gruben speak little French.

Facilities along the route

Another difference stems from the different nations’ approaches to the mountain economy. In Switzerland, you will see more small-scale farming and less tourist infrastructure in the valleys you walk through. In France, you will find more cafes and buvettes dotted around the mountains. Perhaps because of its history as a major ski resort, the Chamonix valley feels far more developed than other parts of the TMB. However, almost every stage of the TMB has numerous places to stop for lunch or refreshments if you don’t want to carry a picnic. This is still true for the Swiss and Italian parts of the route, but the valleys are less crowded than Chamonix.

On the Haute Route, the further you get into Switzerland the scarcer the facilities become. After Le Chable, finding refreshments on the route is much less common. And after Le Chable, you won’t be able to withdraw cash until Zinal, six days later. Shops get rarer too, but most overnight accommodation options will provide you with a packed lunch for the following day. Zermatt itself is a large resort town with plenty of facilities, but on the approach to it, there is only the occasional mountain refuge and a handful of restaurants along the valley floor.

When to do the Haute Route or TMB

Although hiking in the Alps is possible from late-May until well into the autumn, the season for these long walks is limited by both weather conditions and by the availability of accommodation. Snow cover persists well into the summer in the higher pastures.

The TMB has a longer season, with treks beginning early in June. For early season treks, the biggest problem is the snow cover, which in some years can make certain sections impassable. In June you will need to be prepared to alter your route, and the more challenging variations are not usually feasible. At the other end of the summer, September brings quieter paths and the weather is often settled. But the temperature is dropping and most accommodation shuts down at some point in the month. By October it is very difficult to complete the route unless you are self-sufficient with a tent.

The Haute Route is trekked infrequently before late-July, as the snow lies on the high crossings until then. It is not uncommon to finish in early-September, but after this accommodation can be a problem. The cooling temperatures in September mean that bad weather can bring snow to the high passes instead of rain. Going late increases the risk of not completing the route.

These are both excellent and challenging routes. If you want an accessible long-distance walk that is still a big achievement then the Tour de Mont Blanc might suit you. If you want a tougher challenge, a longer trip, or you are going in July/August and don’t like crowds, then the Walkers’ Haute Route could be just what you are looking for.

Whichever you pick, make sure you are properly prepared. Both treks demand a good level of fitness and a head for heights. And remember that the weather can be changeable. Over the course of ten days or more in the mountains, you will probably have a mixture of good and bad weather. Carry waterproofs and some warm layers, as well as sun-cream, sunglasses and a hat.

Either walk should be a great experience that you remember for a long time. However, there are many more great long-distance walks in the Alps and beyond. The fact that some are less famous is a bonus, as they feature equally good walking with fewer crowds. Routes to consider are the GR54 Tour des Oisans, the GR20 Corsican Haute Route and the Alta Via Routes in the Dolomites. There are also some much longer routes such as the GR5 (Geneva to Nice) or various variations of the Pyrenean Haute Route from the Mediterranean to the Atlantic. These typically take months to complete, but it can be well worthwhile to do a week or two-week section at a time.

7 Comments on “TMB or Haute Route?”