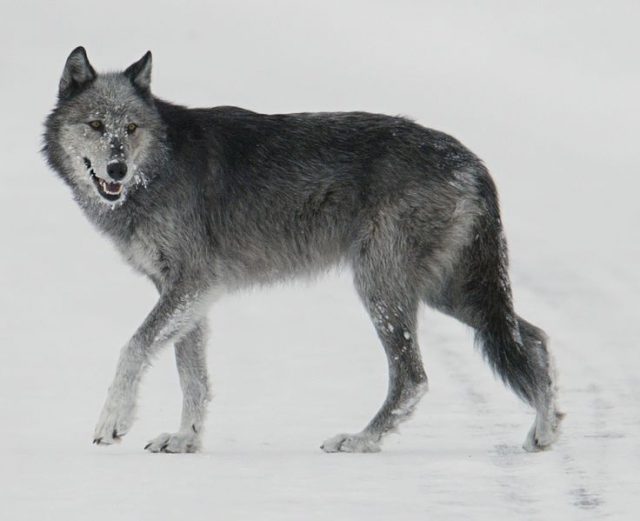 The grey wolf is one of the three large predators that disappeared from the French Alps towards the end of the 19th century, the other two being the lynx and the brown bear. However, in the past few years, small numbers of wolves have migrated from the small remaining Italian populations and re-established themselves in the French Alps. It is estimated that there are now 300-500 wolves living wild in France.

This large canine is native to much of Europe, Asia, and North America. Adult wolves range from 105 – 160cm in length and can weigh from 25 –79kg. Their size depends to an extent on latitude, with larger animals found in colder environments and smaller animals in warmer climates. In Europe, the average weight of an adult male is 40kg, with females weighing 10-20% less than males.

The wolf’s winter coat is very thick, allowing it to stay warm even in extreme cold. The fur is made up of two layers: a thick, fuzzy underfur that traps air and heat, and a long coarse outer fur of water-repellent ‘guard hairs’. Together these make an extremely efficient insulation for the wolf. Tests of heat loss from their fur have shown that virtually no heat escapes from the wolf’s body. In the spring, they moult, losing some of their thick underfur and ensuring that they don’t overheat in the summer.

During the middle-ages, wolves lived across most of Europe. They were largely exterminated during the course of the 18th and 19th centuries, as human farming expanded into their natural habitat. The destruction of their environment led to a reduction in numbers. In addition, large predators such as the wolf, the lynx, and the bear represented a threat to livestock. Most agricultural societies sought to eradicate these animals to protect their farms. In particular, the wolf has always been feared and hated, and many authorities paid bounties for wolves killed. The result was that by the early 1900s, very few wolves remained. Small populations still lived in Italy, but across most of the Alps, they had been eradicated.

From the 1900s, governments across the Alps passed legislation to limit the impact of human farming on the natural Alpine environment and preserve the original habitat. Reforestation and conservation measures were implemented, all of which improved the Alpine ecology. This helped a number of previously eradicated animals, such as the ibex and the wolf, to re-establish themselves. The Bern Convention of Conservation of European Wildlife and Natural Habitats (1982) gave protected status to wolves. Since then, wolf populations have slowly increased across much of the Alps.

Wolves are adaptable and can live in a variety of environments, from tundra to forests, grasslands, and deserts. The grey wolf can be found wild across much of North America, Eastern Europe, and Asia. Populations are now also growing in the French Alps, Italy, Northern Spain, and central Scandinavia.

They are social animals and live together in packs. The average size of a pack in Europe is five or six individuals. It used to be thought that these packs were dominated by an ‘alpha male’ or an ‘alpha pair’. However, studies have shown that wolf packs are based on a family structure, with a parent pair and their offspring.

Wolves are monogamous and pair for life. Females produce one litter of pups per year, in spring or early summer. Litter sizes vary on average from four to eight. The pups are born blind and deaf and totally dependent on their parents. They weigh only 300-500g at birth, but grow quickly. They spend their first few weeks with their mother, in the den where they were born. During this time, the adult male brings food to the female and the pups. By the time they emerge from the den, after a month or so, they are agile enough to be able to escape from danger.

The pups stay with the parent pair for anything from one to three years, after which they tend to disperse to find mates and form their own packs. If they stay for more than a year, the female will give birth to another litter, and the pair will continue to take care of the older pups in addition to the new litter.

Wolves are carnivores and their diet consists predominantly of wild ungulates (hoofed animals), including deer, sheep, chamois, and ibex. However, when food is scarce, they will also prey on smaller animals – rodents, lizards and snakes, as well as supplement their diet with berries and fruit.

When hunting large prey, wolves generally attack in packs. There is much debate over whether their hunts are coordinated attacks, showing forethought and communication, or whether they are simply groups of individuals hunting prey. Some studies have suggested that wolves display both ‘ambushing’ and ‘relay chasing’ (a cooperative chase in which pack members take turns to play different roles) behaviour when hunting, thus displaying an understanding of their hunting strategies.

Other studies have used mathematical simulations to show that group hunting characteristics emerge naturally from wolves following simple rules, without the need for complex thought. Muro et. al. [1] results showed remarkable convergence with observed wolf hunts using the two rules: 1) Move towards the prey until a minimum safe distance to the prey is achieved and 2) When at the safe distance, move away from the other wolves that are within the safe area. They concluded that no social structure or communication skills are necessary for a successful hunt and that the animals in a pack act individually rather than work together.

There is still disagreement even among wolf experts as to the level of communication between wolves during a hunt.

Regardless of whether wolves communicate during a hunt, they do communicate with each other at other times. While they also bark and growl, probably the most well-known example of wolf communication is their howling. They howl to assemble the pack, find each other and warn of danger. Their sound can carry great distances, particularly on quiet clear nights, which is perhaps why the sound is often associated with malice. Despite what is commonly believed, they don’t howl at the moon.

They have a very keen sense of smell and this plays an important role in wolf communication. Large numbers of sweat glands are found on their face, back, feet and under the rectum. They use these, together with urine, to mark their territory. This is also the way females communicate their reproductive state during the breeding season.

Humans have a complicated relationship with wolves. Their reappearance in the Alps has generally been more contentious than the reappearance of the other two ‘big predators’, the lynx and the bear, both of which have recently been observed increasing in number in the Alpine regions. In our next Alpine Wildlife blog post, we will be taking a look at the Eurasian Lynx and how it has been successfully reintroduced to the Alps after being hunted to near-extinction.