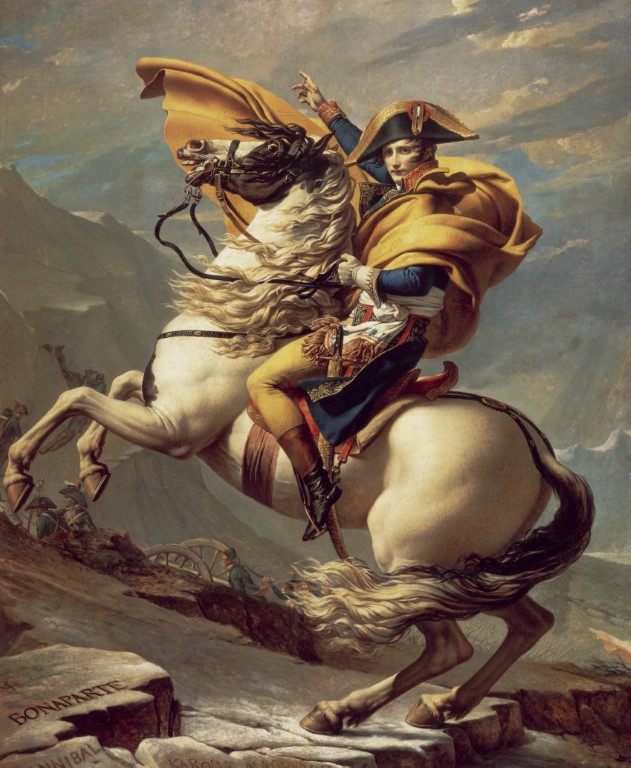 At the dawn of the 19th century, newly republican France was at war with much of Europe. In the south-west of the country, the Alps formed a natural barrier against invasion, so the high mountain passes aquired a vital strategic importance. This story focuses on the region around the Swiss-Italian border in what is now the Valais region of Switzerland, only a few miles from the French-Swiss border.

In May 1800, the same year that Barry the dog was born there, Napoleon Bonaparte led the French reserve army over the Grand St. Bernard Pass from Switzerland to join the campaign in Italy. With 46,292 men under his command, he needed a lot of supplies to sustain them. Napoleon demanded provisions from the tiny village of Bourg St. Pierre, the last settlement before the pass. Faced with this vast number of troops, the locals had little choice but to comply. The items comandeered amounted to the substantial list below.

The featured image above shows Louis-Pierre David’s famous 1801 painting of Napoleon at the St. Bernard Pass, also known as Napoleon Crossing the Alps.

At the time, Napoleon refused to pay a single centime for these services, but he did write a letter acknowledging the debt and promising that the French government would pay the sum of 40 000 Swiss Francs. Five years later in 1805 the French government did pay, but only 18 000 Francs. The inhabitants of Bourg St. Pierre kept Napoleon’s letter safe, presenting it to the French government at intervals and meticulously adding interest.

Nearly two centuries went by until 1983, when Francois Mitterand was President of France. At this stage, the mayor of Bourg St. Pierre was named Fernand Dorsaz. He demanded of monsieur Mitterand that the French government pay 150 million Francs (about £50 million), an amount equivalent to the original 22 000 Francs plus 184 years of compound interest. For a village population of around 200 people, that would have been quite a substantial windfall. The Mayor did generously add that he would accept a more modest sum of 30 000 Swiss Francs.

A year later, in May 1984, the French government’s Chef de Cabinet, Jean Claude Collier, presented a commemorative medallion, nearly a metre in diameter, to the village along with a letter from President Mitterand. Fernand Dorsaz might not have obtained the payment demanded, but he was happy with the symbolic gesture. After 184 years, he declared the matter closed.

Napoleon’s letter, the medallion and the Francois Mitterand’s letter are all held proudly in the village of Bourg St. Pierre today.