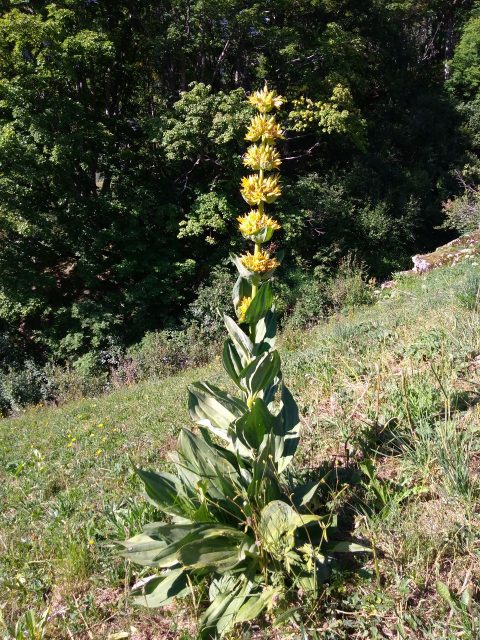 From June until August, the great yellow gentian makes an impressive sight standing tall in alpine pastures. Many members of the gentian family are subtle and discreet, producing small, delicate, purple-blue flowers. Not this one! It grows over a metre high and gives a dazzling display of bright yellow blooms.

Throughout history, the roots have been used to make both medicinal tonics and bitter liqueurs.

The plant is known for its bitter roots, which are used to make Suze, a bitter French aperitif made in the Pyrenees since 1889. The drink shares its yellow colour with the flowers and is definitely an acquired taste. Made from a mixture of wild and farmed gentians, the process involves macerating the roots in alcohol for over year before pressing them in a factory designed by Gustav Eiffel.

The Gentiana lutea and the gentian family take their names from King Gentius, who used the plant’s medicinal properties to cure his army of a plague. Gentius was the last king of the Ardiaei, a tribe in Illyria, from 181-168BC. Illyria was the name given by the Romans and Greeks to the western region of the Balkan peninsula. The lands of the Ardiaei extended through modern-day Albania and Montenegro at the start of Gentius’ reign. Although initially a successful military leader, Gentius’ alliance with Macedon against the Romans led to his downfall. After his defeat in 168BC, Southern Illyria came under Roman rule while Gentius and his family lived out their days as Roman prisoners in Iguvium. 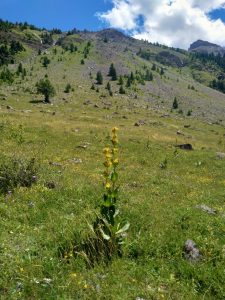 This tall plant has large, ribbed leaves which grow in pairs from a straight central stalk. The plant typically grows up to 1.2 metres high. The flowers are grouped in rings around the bases of the upper leaves.
It is found in meadows up to 2500 metres of altitude across the Alps and other mountain ranges of central and southern Europe.

Before flowering it can be confused with the poisonous White False Helleborine (Veratrum album). This latter plant has similar large ribbed leaves, but they grow alternately rather than in pairs. After flowering the green blooms are quite different from the yellow ones of the gentian. The Helleborine’s toxins were once used to produce poisoned spear heads, so confusing it with gentian root could be a deadly mistake.