Tales of the Alps – The Devil’s Bridge 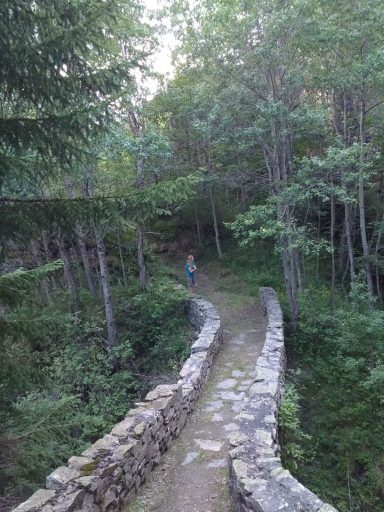 This story recounts the legendary origins of the Pont du Diable, or Devil’s Bridge, in St. Christophe-en-Oisans.

Saint Christophe-en-Oisans is a sleepy alpine hamlet halfway up the Veneon Valley. The inhabitants keep livestock in the high pastures, or welcome the visitors who come for the spectacular mountains on all sides. In winter, a few discerning skiers descend from Les Deux Alpes or La Grave when the snow is right. These adventurers stop for lunch or a drink in the two restaurants before disappearing down the road by minibus.

In Les Deux Alpes itself, skiers often wonder why the Diable sector is so named. Two chairlifts and a number of steep pistes bear the name Diable, which is French for Devil. The short answer is that the area takes its name from the jagged Crête du Diable ridge, which runs behind the Super Diable chairlift. Beyond the Diable ridge, steep cliffs plunge down to St. Christophe, which sits above the Torrent du Diable river. And crossing the river’s deep ravine lies the Pont du Diable bridge, which is at the centre of our story.

A modern bridge takes the valley’s one road across the river gorge. Hidden below it is the original bridge which dates back to Roman times. Without crossing the Diable gorge, the only way to access St. Christophe and the upper Veneon valley would be to walk along the valley floor, alongside the Veneon river, before climbing steep hillsides to reach the village. This route is exposed to avalanches in the spring and floods when the river is high. The current route avoids these dangers by staying higher up on the north side of the valley. It is easy to see how the inhabitants of the upper valley in centuries past would have wanted a way to cross the gorge to reach their homes and livestock more safely.

According to local legend, the villagers of St. Christophe made numerous attempts to construct a bridge. However, the task proved difficult and dangerous due to depth and steep walls of the gorge. The works collapsed into the torrent several times before they could be completed. One day, a stranger appeared in the town and offered to build a bridge across the river in a single night. The local inhabitants realised that this could only be the devil himself. The offer was tempting, but they demanded to know his price before accepting. The stranger answered that he would take the first soul to cross the bridge as his payment.

The villagers considered this proposition at length. The price was a high one, which few were willing to pay. On the other hand, a bridge was sorely needed and the small farming community lacked the expertise to build one. Reluctantly, a delegation from the village approached the devil to accept the deal.

The stranger disappeared, with no sign of the new bridge as night fell. Next morning, the locals awoke early and rushed to the edge of the gorge. Sure enough, a new stone arch spanned the river. At the far end, the stranger waited to take his payment. The villagers formed a huddle. Nobody wanted to be the first to cross the bridge but reneging on a deal with the devil is not to be taken lightly either. After some discussion they settled on a plan involving a rat, a cat and a dog. They released the animals in turn so that the rat fled across the bridge pursued by the cat, which was in turn chased by the dog. The furious devil had to be content with these trophies, and the villagers got to keep both their souls and their bridge.

Hundreds of years later, the old bridge is still carrying visitors across the torrent below. Vehicles pass over the modern arch just upstream, whilst walkers can enjoy the pleasant path through the woods below the village church which takes the old bridge across the river. If you ever drive up the Veneon Valley in summer it is well worth a stopping the car just before the new bridge to take a walk down to the old one.