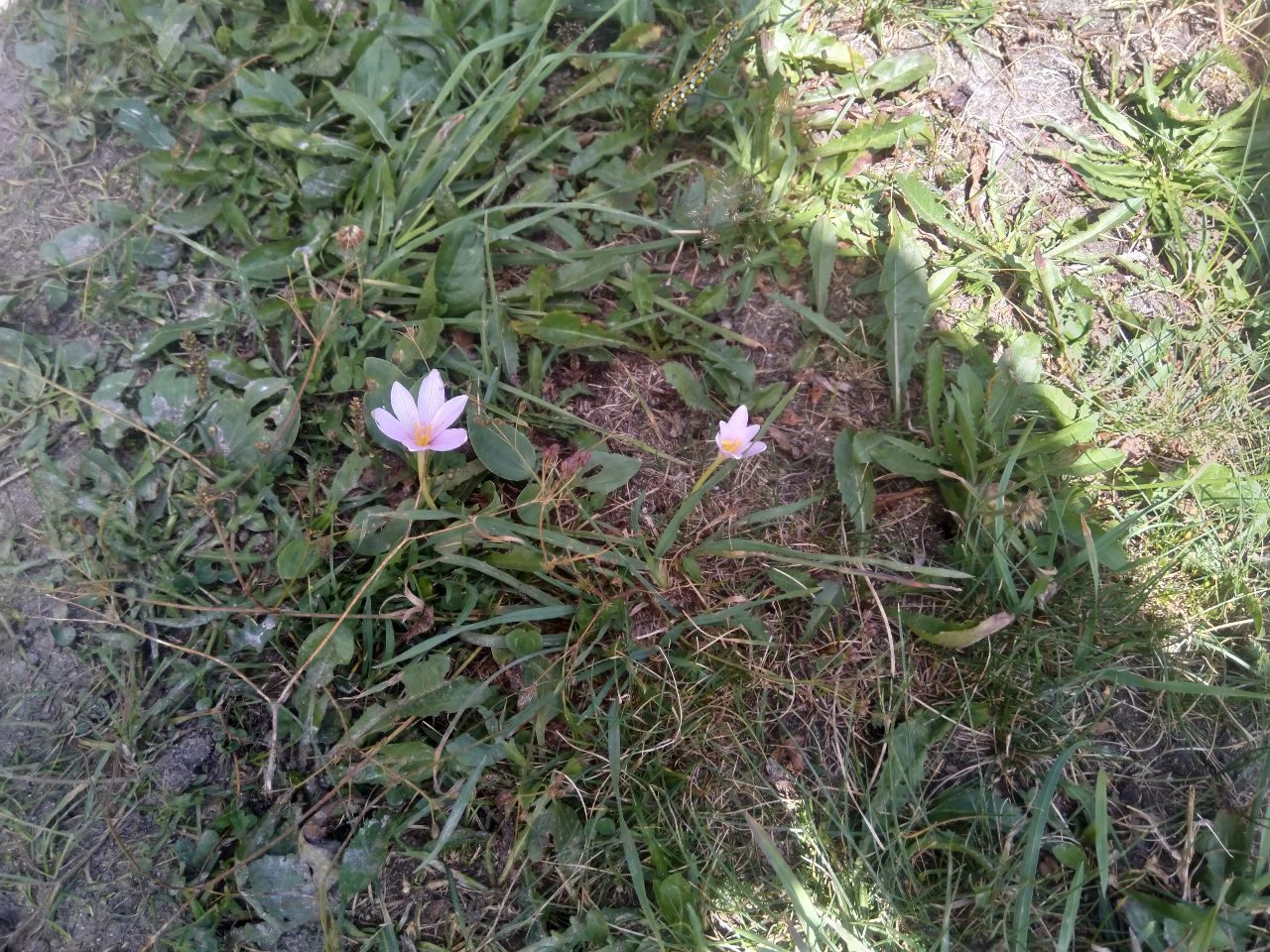 For the final Alpine flower article of the year we take a look at Colchicum autumnale. This is one of the few Alpine flowers you can still see flowering in mid-October. The delicate pink blooms flower across the Alps, and most of Europe, from August until October. Besides the common name of autumn crocus, they are also known as meadow saffron or naked ladies. The last moniker comes from the fact the flowers bloom without leaves, giving them a naked appearance. The plant does produce leaves, but these only appear from spring until mid-summer. These green leaves die back before the appearance of the flowers.

Although very similar in appearance to its namesake, the crocus, the Colchicum species are unrelated, belonging to the Colchicaceae family. True crocuses belong to the Iris family, Iridaceae. The easiest way to tell the flowers apart is that Colchicum flowers have six stamens while crocuses have only three (the stamens are the antenna like parts within the flower head, yellow-topped in this case). The other giveaway is that most crocuses flower in the spring but the Colchicums flower from late summer into autumn.

The common name of meadow saffron might suggest a plant with culinary uses, but in fact all members of the Colchicaceae family are poisonous. There have been several fatalities from ingestion of Colichicum Autumnale, notably after confusing the plant with wild garlic.

Nineteenth century serial killer Catherine Wilson used the plant’s toxic ingredient, Colchicine, in several murders. Wilson worked as a live-in nurse, persuading her patients to change their wills in her favour before poisoning them. Her husband also died in suspicious circumstances, with a bottle of colchicine found in the room.

Like many poisonous plants, Colchicum has a long history of use in traditional and herbal medicine. As far back as the 6th century AD, Alexander of Tralles was recommending the plant to treat gout, a use which persists to the present day. Going even further back, it was probably used to treat joint pain as long ago as 1500BC. The Ebus Papyrus of that period describes a drug with very similar properties to Colchicum Autumnale. During the middle ages people thought that simply carrying a bulb of Colchicum could ward off the plague and other infections.

Modern pharmacy uses Colchicine in tablet form to treat gout, rheumatoid arthritis and familial Mediterranean fever. It can also relieve swelling and joint pain. Due to side effects which include abdominal pain and diarrhoea, its use for gout and arthritis is often restricted to patients who cannot tolerate alternatives such as steroids or NSAIDS. However, it has proved to be a life changing drug for patients with familial Mediterranean fever. In up to 60 percent of cases of this inherited condition, lifelong colchicine treatment can stop the fever attacks completely.

Colchicum in myth and legend

Colchicum takes its name from the land of Colchis, the ancient Greek name for a region in modern day Georgia. Today, Colchis is best known as the destination of Jason and the Argonouts on their quest to find the Golden Fleece.

There are several legends connecting Medea, princess of Colchis and Jason’s tragic lover, to the Colchicum flowers. After falling in love with Jason, Medea helped him to gain the Golden Fleece on condition that he married her afterwards. This meant defying her father, King Aeëtes, and fleeing from Colchis, murdering her brother in the process.

Medea had a reputation as a sorceress and healer. Given this, her connections to a flower with both toxic and medicinal properties are not surprising. One story is that the flowers grew where Medea spilt drops of a magic potion onto the ground. Another is that she used Colchicum roots to create poisons.

The ancient Greeks would certainly have known of the toxic properties of the flower. Slaves at the time are believed to have eaten just enough of the plant to become too ill to work, but not enough to make them seriously ill.

Look out for the delicate flowers brightening on your next autumn hike. Take care not to eat it though, if you are foraging for edible plants. Watch out in spring when the green leaved bulb can be mistaken for wild garlic or other edible roots.