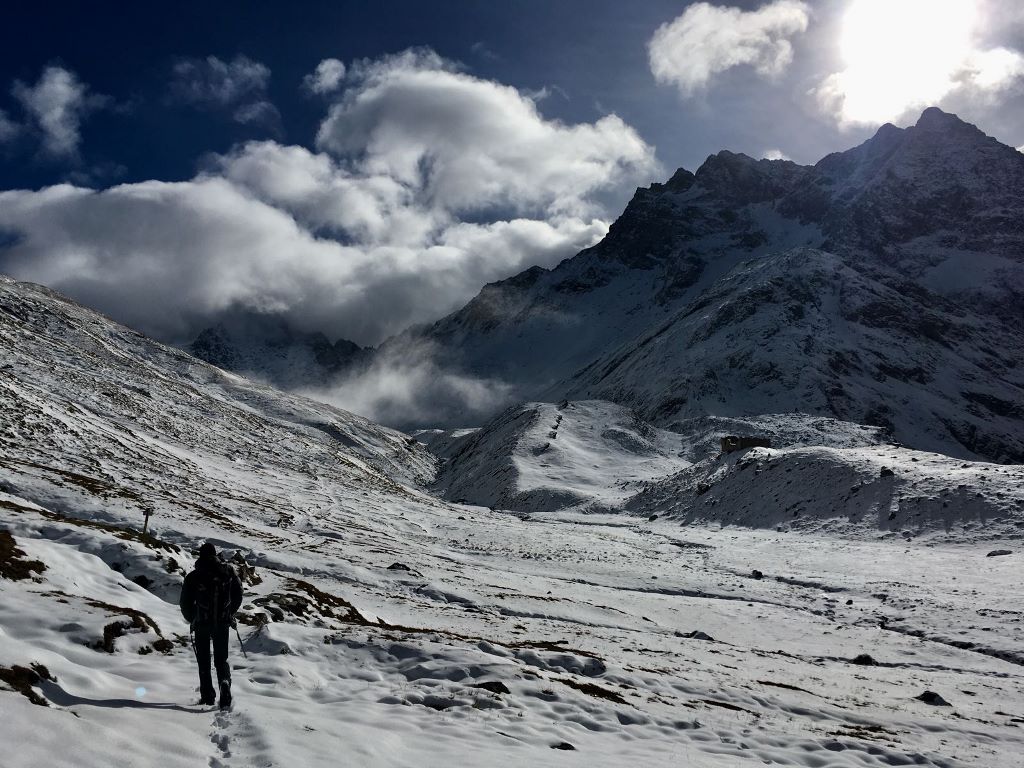 I have written a few posts about ski touring around the Col du Lauteret. There is also some great walking in the same area. In fact, many of the ski tours make good walks and vice versa.

The Col d’Arsine is one such outing. In summer or winter it makes a nice destination, taking you behind the Combeynot peaks and well into the Ecríns national park. You can approach from the east, above Monetier, or from the north, below Villar d’Arene.

We did this walk just over a week ago, in the first snows of the winter. While not deep enough for a skiable base, there was enough snow to give the walk a wintery feel. Beginning from the Pied de Col campsite near Villar d’Arene, we followed the upper reaches of the River Romanche. Flat at first, the path climbs quite steeply before too long. You soon reach a flatter section where you pass a weather station on a knoll to the right.

After this, the valley opens out a little as you reach the Alpe de Villar d’Arene. This old settlement is home to the refuge of the same name. It sits at the confluence of two valleys, one leading to the Col d’Arsine and one into the heart of the National Park. The latter is the route to the Adele Planchard and Pavé refuges, and many ski tours and mountain routes.

As we climbed towards the col, the weather closed in and visibility became progressively worse. The route climbs towards the head of the valley then swings sharply left to the col itself. Above and to the right of the col, a short climb leads to the Lac du Glacier d’Arsine. This scenic spot would be a tempting objective, but in poor visibility and with difficult conditions underfoot the col itself was enough of a challenge for the day. 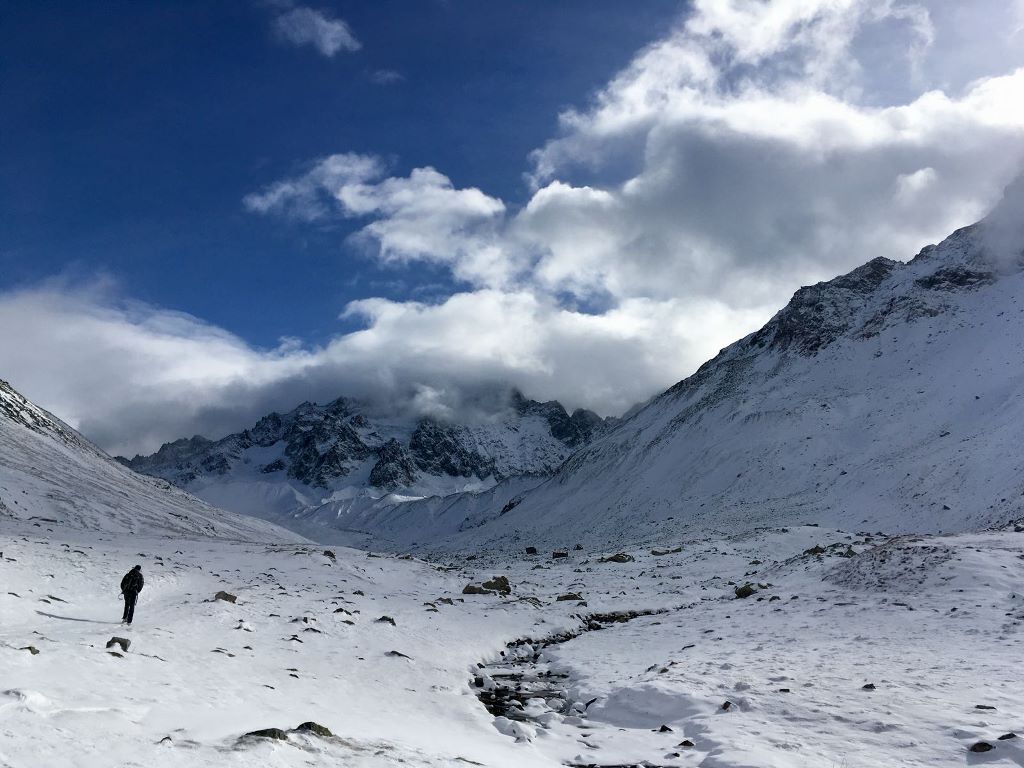 Finding the actual col was not that easy because it occupies a large flat area strewn with big rocks. There is a signpost, and in summer it would be simple enough to follow the path. In the snow, the path was invisible and the signpost hard to see. We managed to spot it from a distance and wind through the boulder field to reach it. With transport left at le Casset, the descent to the East would make for a more complete feeling day out. With one car, a there-and-back walk is the most obvious option.

In descent, the threatening clouds finally shrouded us completely in mist. Following our own tracks back made potentially difficult navigation into a simple affair and we soon regained the refuge. 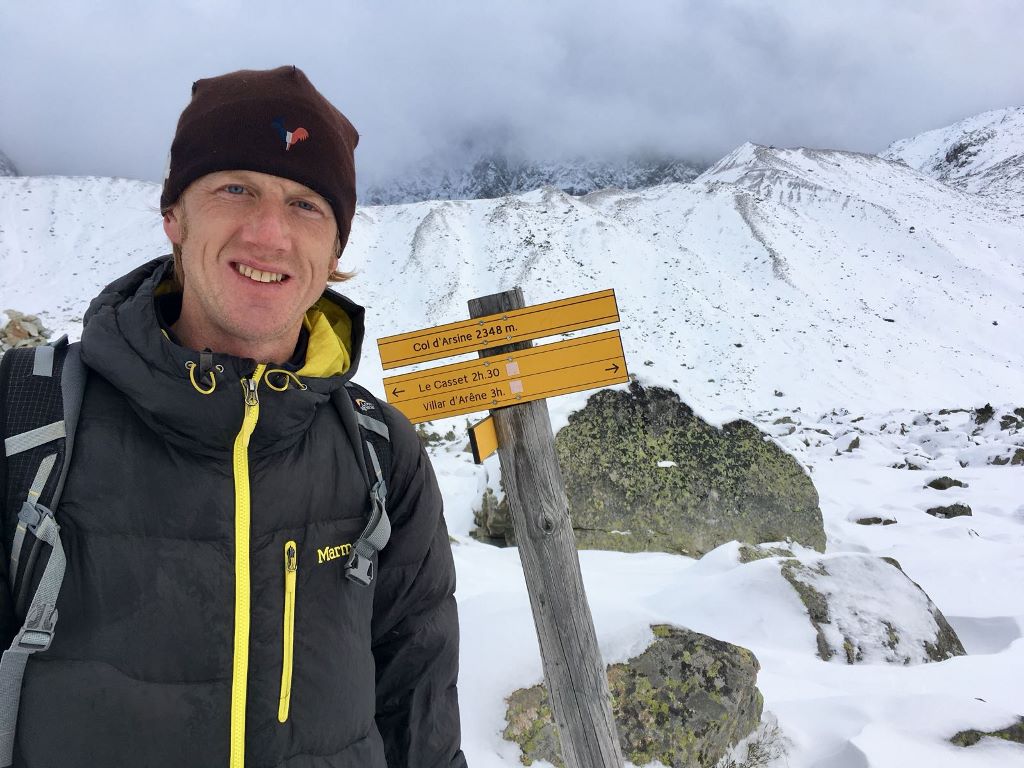 I should note at this point that the signposts here buck the trend of being generous with their timings. Demonstrating this, the sign indicating 20 minutes to the Col d’Arsine was three kilometres and 300 vertical metres below it. Standard Naismith’s rule timings for this would just over an hour, and signpost timings are usually longer. To prove this was not a one-off, other signposts nearby gave quite ambitious timings for the average walker.

As with most routes on the Meije Pelvoux map, sheet 3436 ET, the terrain is deceptively steep. This map has the contours spaced at 20 metres, rather than the 10m intervals found on the rest of the maps in the series. Even knowing this, it is hard to visualise the full steepness of the valleys when you are used to 10-metre contours.

Do get in touch if you are interested in booking a ski touring or alpine trekking experience in the area.

With thanks to Stine Keyes for additional photographs.