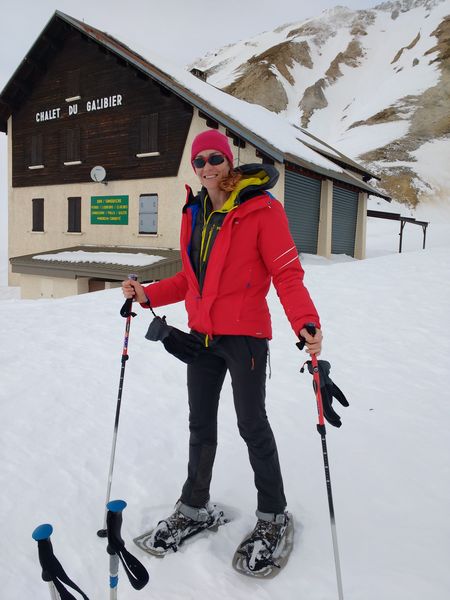 Low level snow is a bit lacking at the moment in the Oisans, but from 2000m upwards there is decent coverage. Consequently ski touring and snowshoeing are still possible from the road at the Col du Lauteret, while most other popular spots in the region would require a walk to reach the snow.

I had recently invested in a pair of snowshoes, and I bought Stine a pair for Christmas, so we decided to try them out on Christmas Day. Unfortunately, as it turned out, I had only bought Stine one snowshoe. There is a lesson there about checking things when you buy them and not just grabbing a bag off the shelf. Fortunately the helpful people at the Skirie were able to rent us a pair for a very reasonable price, even on Christmas day.

We drove to the Col du Lauteret and parked up before putting on our snowshoes and setting off. The weather was on the cold side of freezing and a hazy cloud was hiding the sun, so lots of layers were in order. We started on the snow covered road to the Col du Galibier, but I was keen to see what the snowshoes were like on a steeper incline, so we cut out a couple of the zig-zags and headed straight up. The heel lifters were useful for a while, but as it got steeper the snowshoe crampons and ski poles came into play. At around 35 degrees progress was straightforward, but above that it got quite tricky. We regained the road and followed it along a gently rising contour ascent, made more difficult by having to cross the occasional debris of old avalanches.

The road follows the hillside into the Vallon de Roche Noire, and we followed it to the bridge where we stopped for lunch beside the river. After this we continued until the Refuge de Galibier, beside the entrance to the tunnel. The going gradually got more difficult as the snow covering the road became deeper and more banked up. We decided that continuing up the steeper slopes to the Col du Galibier might be a step too far on snowshoes, as having ski toured up there I know that the top section of the road can be a bit treacherous when buried by banked up snow.

We turned around and headed back down to the Lauteret in good spirits to cook a turkey, feeling that our first go at snowshoeing had been a great success.