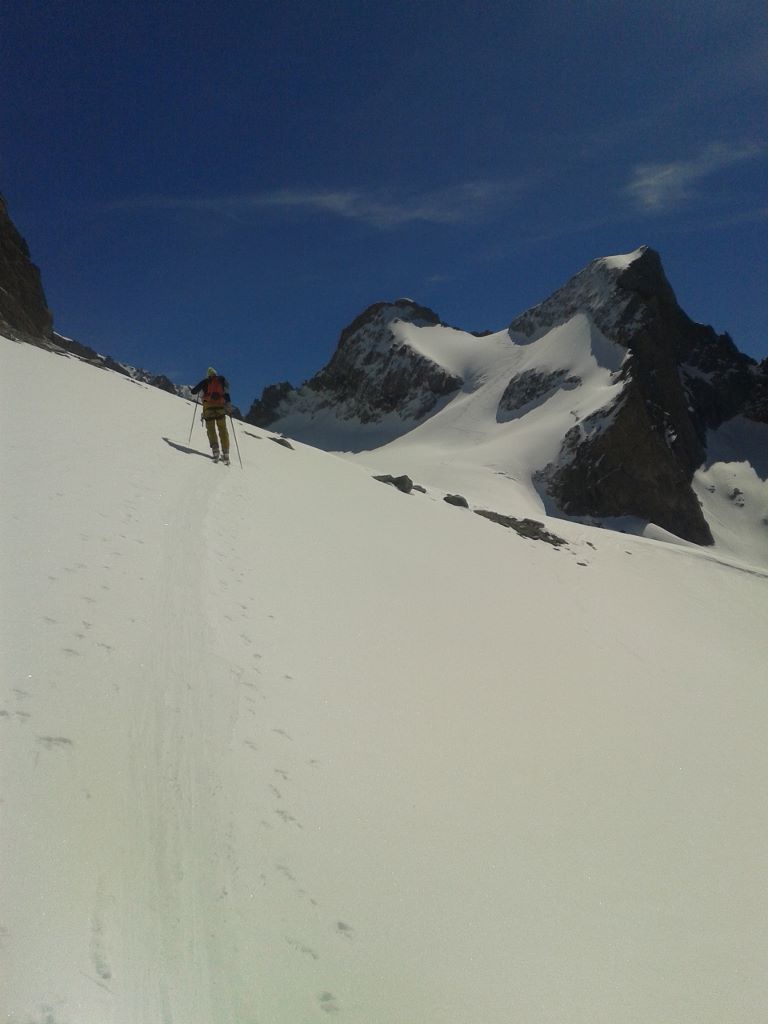 My final ski tour of last winter was one that I had been wanting to do for some time. The Col du Replat connects the Selle and Etancons valleys which lead to St. Christoph and La Berarde respectively. The previous summer Jon and I had done most of the route in reverse, climbing the Tete Nord du Replat via its SW arete from the Chatelleret hut in the Etancons valley before descending to St. Christoph in the Selle Valley. Now we planned to swap alpine climbing boots for skis (or a snowboard) and cover most of the same terrain on snow, with Colin joining us to make three.

Like the Vallon de la Selle, the route begins on the Dome de la Lauze, close to the top of the La Grave drag lift. These south facing slopes can give fantastic spring skiing later in the morning, but for this route we needed to go early so as not to be too late on the south-east facing slopes beneath the col.

We skied delicately on icy slopes, bearing left from the usual Selle descent until we could put our skins on for a rising traverse below rocks onto the Replat, or re-flattening, of the glacier. We were not the only people with the Col de Replat in mind and we met a few people heading for the traverse, including local off-piste guru Damien. We were the only people planning to cross into the Etancons valley though, as the others were skiing the north-west side of the Replat.

The glacier crossing gave easy skinning in a spectacular glacial cirque where it was easy to forget how recently we had left the ski lifts behind. Soon after, the route steepened as we got onto the north face of the Replat. A solid hour or so of kick turns and we were at the Col – a relaxed saddle when viewed from the north but with a only narrow slot leading through the granite to the south face.

After a short break for a snack and to take the skins off we headed for the breche. Putting skis on was a little awkward here in the confined space, before dropping into a tight couloir. After perhaps thirty metres this led to a wide open bowl with undulating slopes of spring snow. Care is needed with the route finding here, as to descend safely avoiding the cliffs requires a traverse to the right, then a further traverse left lower down. The aspect varies from south-east to north-east, so it is important to choose the right line for the best snow depending on the time of day.

After navigating around the waterfalls and rocky bars the route pops out into the Etancons Valley by the Chatelleret refuge. Although it was tempting to stop there for a while, we decided to keep the little height we had above the valley floor to ski further before having to walk. Even so, the flatness of the valley meant that we did not get much further without having to push.

This valley features in an iconic engraving of Pere Gaspard, first ascensionist of La Meije, from 1876. If you compare it to the photograph of Colin you can see that not much has changed.

From the end of the snow, it was about an hour’s walk back to La Berarde and the car we had left there for the journey back to Les Deux Alpes.

This is a great day out, not least because of the distance you can cover between the start and finish points. It takes the best part of an hour in the car to get back to Les Deux Alpes from La Berarde. Partly because of this, and partly because of the remote feel of the Etancons Valley overlooked by La Meije, you get a real impression that you are entering a wilder part of the mountains.