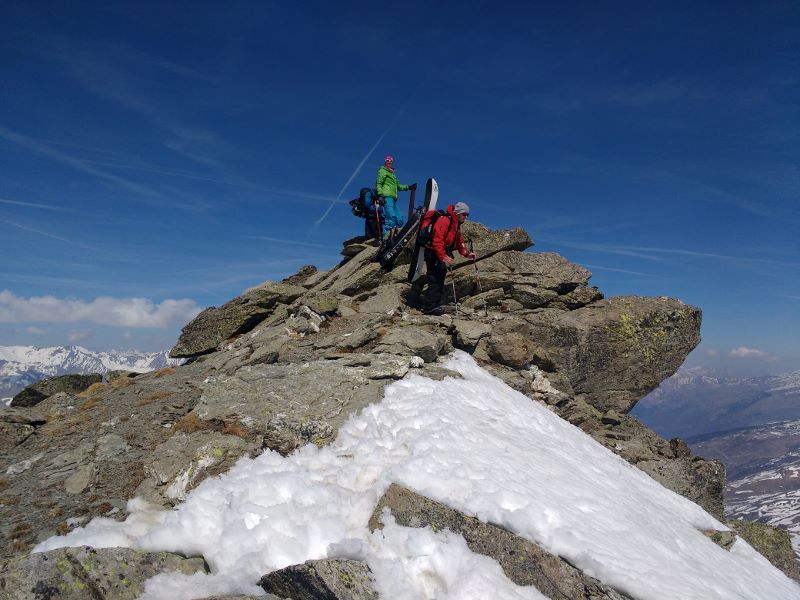 This is another nice ski tour in the Mont Thabor range. We did it on the last day of the TipTop trip to the Drayères Refuge in April.

This is slightly shorter than the previous route (Rocher de la Grande Tempête) and more southerly in aspect, so it makes a good morning tour on a spring day. Normally it would be best to be down by lunchtime for a tour like this in late April. With the cold temperatures leading up to this particular trip, the snow was taking longer to transform so we could take our time.

We had thick cloud just above us, so we knew the chances of us reaching the summit were low without heading into thick mist. We knew that the chances of the snow softening were low as well. We set off anyway, determined to go as far as we could and ski back when the visibility got too bad. We took the same start as the previous day and then swung left following a steep-sided river valley. A short, sharp climb led to a small plateau and the Cabane de l’Ours (the Bear’s Cabin). We had a good look around the cabin but saw no signs of sleeping bears.

Above the plateau was a slope divided into three broad couloirs. We all made a note of this for the descent, as we skirted it to the right hand side. All the while the cloud stayed just above us, gradually lifting as we climbed.

Above the couloirs, we reached a knoll where the valley broadened and flattened. Ahead of us spread the complex rolling terrain we were coming to recognise as the norm in this area. The peak of Roche

was still shrouded in cloud, but it was easy to work out where it sat at the head of the valley. As we reached the summit ridge the sky cleared and we gained the top in the sunshine.

We gazed at the views into neighbouring valleys for a while, making plans for future visits to the Drayères. Everybody was keen to make a return visit to the Thabor range.

Turning to the descent, the snow was crunchy at the top, since the sun had been late to arrive. After the first two hundred metres, it was starting to soften. By the time we got to the couloirs we had perfect spring conditions. The steeper sections were fun to ski but never very challenging. It was terrain where you could just let the skis go.

Back at the refuge, we enjoyed a barbeque in the afternoon sun. The early morning bad weather had gone for now, but as we walked down to the cars the clouds were rolling in for stormy days ahead. This was one trip where we had just managed to stay a step ahead of the weather.