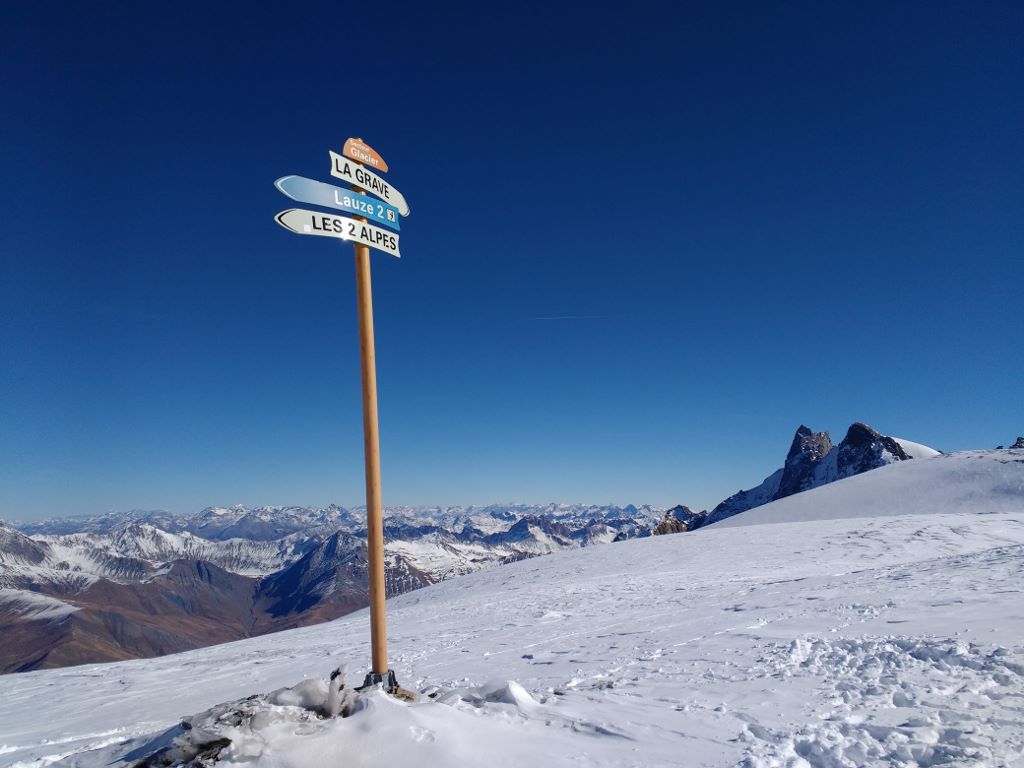 People I ski with in Deux Alpes often ask where my favourite ski resort is. They sometimes seem surprised when I tell them “here”. The fact is, I have chosen to live here, work here, ski here, and buy an apartment here. If some other resort was my favourite I would be doing all those things there instead. 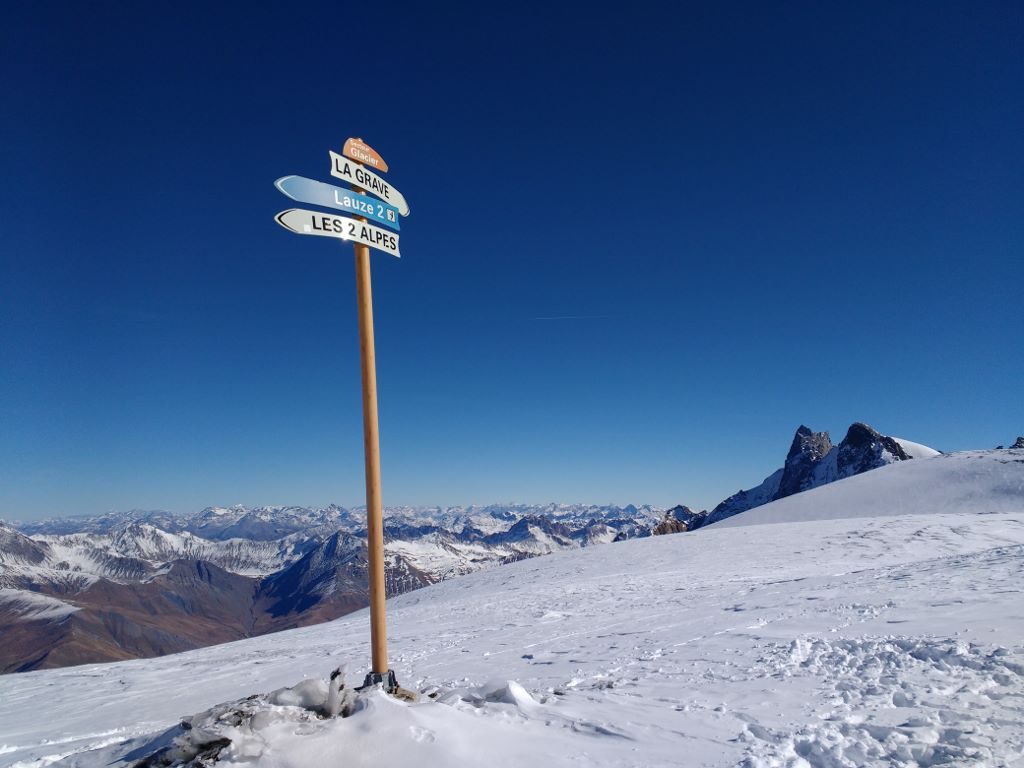 That said, every resort is different and each one has something unique in its favour. I always enjoy skiing in other places and seeing what they have to offer. But I also enjoy coming back home to Les Deux Alpes afterwards.

I don’t plan to throw stats at you – there are plenty of pages that will give you a list of how many lifts or kilometres of pistes we have. Instead, here is an honest run-down  as to how Les Deux Alpes suits different types of skiing – good and bad. As this is from the point of view of a local ski instructor, not a tour operator, it might be a little different from what the brochures will tell you. 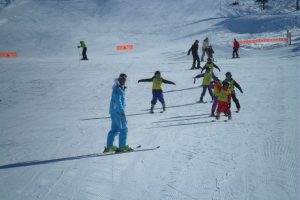 For complete beginners Les Deux Alpes is ideal. We have beginner areas on the snowfront by the village, and also higher up on Les Cretes. This gives your instructor (and as a beginner you should book one) plenty of options as to where to take you. There is a good progression from the easiest to slightly harder nursery slopes.

Around day three or four things do not look so good. Beginners are ready to move beyond the nursery slopes and onto green runs proper at this stage, and our selection is not great. We have Bellecombes 1 – gentle but narrow, the Petites Cretes – gentle but narrow then wide but steep and Demoiselles (long and very narrow). Once on blue runs, things start to improve again, although the blue from the glacier down has some really steep bits for a blue. The blues are quite varied, so it pays to have an instructor or get some local advice as to which are the easier blues and which are borderline reds.

For solid blue run skiers there is plenty of terrain to explore and no sectors are off-limits. The runs on the glacier offer good cruising with great views and there are a few good restaurants to stop at. Further down though, there can be crowds on some pistes, especially at the end of the day and the runs back to the village are tricky. The best option is the new Jandri 1 blue, but being the best option it does get very busy, and consequently can be bumpy or icy.

There are plenty of reds and blacks, some more challenging than others, and some nice off-piste itineraries. The ski area does offer enough runs to keep you going for a week without repeating too many. On the other hand, the layout of the pistes means that you don’t feel like you are travelling as much as in some other resorts. You might be skiing a different run but it is often right next to one you have done before.

With challenging blacks and reds and plenty of reasonably steep off-piste there is plenty to offer the expert skier here. There are some great, long back-country descents to St. Christoph, Lac Chambon and of course La Grave. If we lack anything, it is long off-piste routes within the ski area boundaries. There are only a handful of runs like Chalance or Combe Interdit which bring you back to a ski lift with a drop of over 1000 metres. 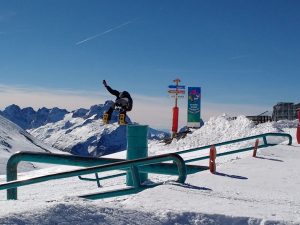 The resort puts a lot of effort into the snowparks, both summer and winter. The two chairlifts in the winter snowpark are a bit slow, but there are plenty of choices on the way down with modules for all levels. There is a short Poma lift serving the Envers section if you want to session one feature with a quick turnaround time. Unfortunately there is no longer a halfpipe in the winter snowpark. Sometimes one of the pipes on the glacier will be shaped in winter, but this is a long way from the rest of the park.

As with most glacier skiing, the summer snowpark is served by T-bars and if anything is even bigger than the winter one. There are two halfpipes, big air, slopestyle, rails and the Easy Park for freestyle novices.

This is a popular resort for snowboarders, with all the benefits described above. There is good learning terrain, good off-piste, good freestyle and not too many moguls. The downside for snowboarders is that there are flat roads linking a few of the areas, and it is not that easy to avoid all of these. 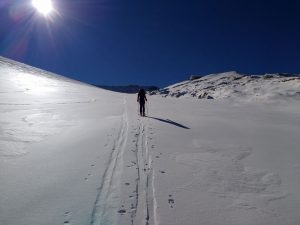 There is not a huge amount of back country ski touring accessible from the resort itself. There are some routes from the top of the glacier, via the Vallon de la Selle or La Grave, but nothing like the quantity you could find close to the lifts in Chamonix for example. However, with a little travelling the Oisans region offers a fantastic range of ski touring options which are often much less travelled than those in the northern French Alps. A growing number of these routes are described on the site, so have a look at the link above.

For those who ski tour for exercise, the resort has created a new ski touring piste in the Diable area, which is marked and controlled for uphill traffic only. This makes it a safe place for the sport even when conditions are more avalanche prone. 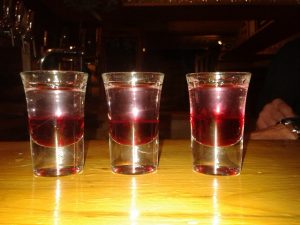 Les Deux Alpes is well known as a party town, and it won’t disappoint. From apres-ski in the Pano Bar (from 3pm at 2600m) to all nighters in the Avalanche or Brasilien, there is something for all types of party animal. You are never far from a bar, but the heaviest concentration is between Rue des Vikings, with the two roundabouts, and the Place de Venosc.