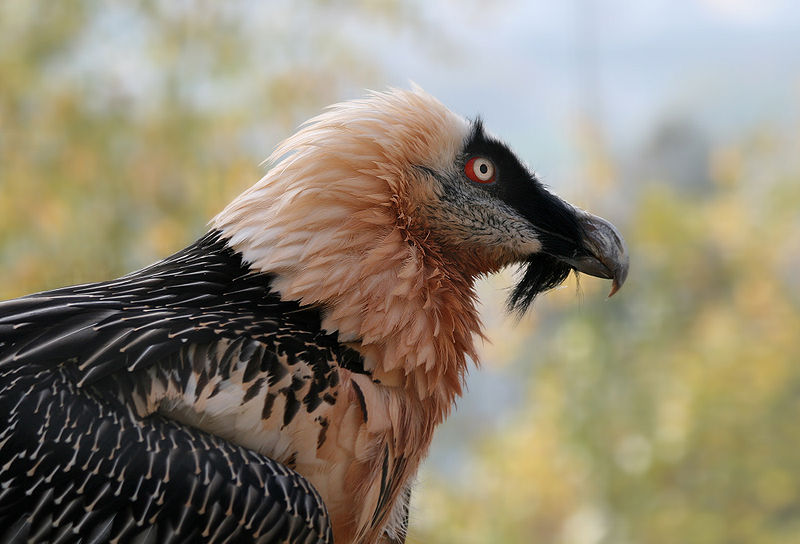 In this post, we look at the Bearded Vulture, or Ossifrage (‘bone-breaker’ in Latin), the rarest in the Alps. This bird is known for its unique feeding strategy that helps it to survive in the harsh mountain environment.

The bearded vulture is the largest Alpine bird. It can reach a wingspan of up to 2.8m and can weigh nearly 8 kg, with females tending to be slightly larger than males. Both sexes have a rust-orange body and head, and black wings. Unlike most other vultures, the head isn’t bald. A dark band runs across the eyes and under the chin, giving the impression of a ‘beard’ from which they get their name. They can be distinguished in flight from the more common griffon vulture by their unusual long lozenge- or wedge-shaped tail. While they are solitary birds in general, they will be seen in pairs when breeding and raising young. Occasionally in the Pyrenees, polyandrous trios of two males with a single female have been sighted.

The bearded vulture is one of the few birds whose diet has evolved to consist almost entirely of carrion bones, and in particular bone marrow. They have a flexible oesophagus, allowing them to swallow bones whole, and with a stomach acid PH of 1, the bones are dissolved in a matter of hours. For bones that are too big to eat, the birds have learned to fly with them to a height of up to 150m, and then drop them very precisely onto the rocks below, breaking apart the bones and exposing the bone marrow. It’s a learned skill, and can take a young chick many years to master.

There has been disagreement over whether these birds ever attack live prey. They have been reputed to pick up rock hyraxes, small lambs and even a monitor lizard and drop them on the rocks below in order to supplement their diet. However, the actual evidence for this is scarce.

A detailed study of the birds and their diet conducted in 1990 1 saw no indication that they attack live animals. The authors noted that the birds were never observed to display behaviour that was consistent with effective hunting. In addition, neither groups of hyraxes nor groups of lambs showed any predator avoidance behaviour when it came to nearby bearded vultures. A black eagle, which does hunt, would cause the animal groups to scatter or group together to protect their young. However, they paid no attention to bearded vultures. This suggests that despite anecdotal evidence to the contrary, bearded vultures rarely, if ever, attack live animals.

The birds live in high mountainous regions across Europe, Africa and Asia. While they have been seen as low as 300m, they tend to live above 2000m and have been observed at altitudes up to 4500m. They were hunted to extinction in the Alps in the early 1900s, when they were thought to be a danger to livestock and children, but they were successfully reintroduced in a captive breeding project in the late 1980s. However, they are still a rare sight, due to their solitary and very territorial nature. With a pair’s territory ranging between 200-400sq km, their population density is very sparse despite its extent.

They build their nests in caves and on ledges along steep cliff faces. The female generally lays 2 eggs, a couple of days apart, between December and February. However only one chick is likely to survive. Biologically, the second egg is only a reserve, and the stronger chick will kill the weaker one within the first few days, as there is only enough food to sustain one.

The rust colour of the bearded vulture has been the topic of some debate. Until recently, the source of the colour wasn’t understood. Naturally, the birds’ breast plumage is white.

They have been observed bathing their feathers and skin in red iron oxide-ochre-tainted water puddles, which is what gives them their characteristic orange colour. Initially it was suggested that this could be camouflage, or ‘cosmetic decoration’ to assert their strength to other birds. However, the more accepted explanation now is that the dust acts as a disinfectant. In sunlight, ochre produces chemicals that can kill viruses and bacteria, and thus protects the vulture.

Our next Alpine Wildlife blog post will take a look at one of the most famous of all Alpine birds: the Golden Eagle. As always, if you have any comments or questions, we’d love to hear from you.