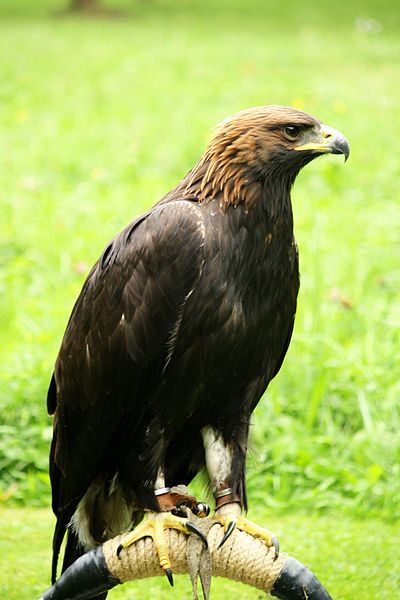 The golden eagle is arguably the most famous of all raptors, and has been revered throughout history. In ancient Greece the golden eagle was Zeus’ messenger and animal companion. The Aquila was the symbol used by ancient Roman legions. It is currently the national symbol of several countries, and is worshipped by native American Indians.

Today golden eagles can be found in a variety of habitats from arctic to desert, across Europe, North and South America, Asia and parts of Africa. 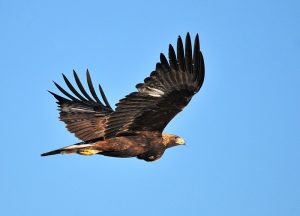 The golden eagle is a large bird of prey, with a wingspan measuring about 1.8m-2.3m. They can reach over 6kg, and their life expectancy in the wild is up to 30 years. The adult plumage is a dark brown colour, with grey patches on the wings and tail. Distinctive golden-brown feathers on the back of the head and neck give the bird its name. Young birds tend to be darker, with white stripes on the tail and white patches on the wings, which it will generally not lose until the bird reaches maturity at 5-6 years of age.

In flight, these birds can be distinguished by their long fan-shaped tail, and short head. They tend to fly in a shallow dihedral shape, meaning that the wings are held at in a slight ‘V’, as seen head on.

The golden eagle is neither the largest nor the heaviest bird of prey, however it displays the largest degree of inverse sexual dimorphism (where the female is larger than the male) of any bird in the Alps. Female wingspan can be up to 10% longer than that of the males, and they can weigh 40% more than their male counterparts.

In most birds, as with mammals, the female tends to be smaller than the male. However, in predatory birds the opposite is true. In fact, the larger and more ferocious the raptor, the more pronounced is this difference. The reason for this difference hasn’t been conclusively determined. One suggestion is that the difference reduces the competition for food between the sexes. The smaller male hunts for smaller prey, while the larger female hunts for larger prey, thus diversifying the food sources. However, this doesn’t explain why it is the female that is larger.

Perhaps the most compelling (although by no means definitive) explanation is to be found in courtship and nesting behaviour. In the early stages of pair formation, the male will often display aggressive behaviour. With his sharp talons and strong beak, he could harm the female. Therefore, it is in the female’s interest to be larger than her mate, in order to defend herself. In addition, the female spends more time incubating the nest and rearing the young than the male (although he does play a part in both). By being larger, the female is better able to defend the nest against predators.

Golden eagles are monogamous, and generally pair for life. They tend to prefer to build nests on cliff faces, but will build tree nests in some locations. The nest itself can be up to 2 m in length, and pairs will return to the same nest year after year, repairing and improving it over time.

The female lays on average 2 eggs, a couple of days apart in early spring. Incubation lasts about 42 days. As is common with raptorial species, the oldest chick will usually attack and kill its younger siblings within the first few days. This evolutionary aspect ensures that the eldest chick has the best chance of survival, even in times of food shortage. The youngest chick(s) are only produced as an insurance in case something happens to the eldest.

Golden eagles are the second fastest animals on the planet (after the peregrine falcon), and can reach a speed of 200 mph when diving for prey. They hunt live prey, but they will also eat carrion and even insects if larger food is scarce. Their diet includes rabbits, marmots and smaller birds however their strong, sharp talons can also kill larger animals such as deer.

They use a variety of hunting techniques, depending on the prey. The most common method involves flying reasonably close (5m-15m) to the ground, with a ‘short glide attack’. This is often associated with attacks on groups of smaller animals. For attacks on ground prey larger than themselves, the eagle will land on the animals back. It then uses its sharp talons to pierce the animal. With a sustained grip and flapping its wings it inflicts maximum damage. The animal eventually collapses either through exhaustion or internal damage.

Exceptional eyesight is one of the characteristics most often associated with eagles. They rely almost entirely on sight for locating prey. Relative to the size of their skull, the eagle eye is enormous, taking up to 50% of the cranial volume (compared to about 5% in humans). In fact, the golden eagle’s eye is almost the same size as that of a human. The eye is so large that there is little room for movement within the socket. The eagle compensates for this by being able to rotate its head to 270 degrees.

Claims that the eagle’s sight is up to 8 times better than that of a human being are likely exaggerated – this would require a pupil many times larger than they have. However, it is true that their vision is at least 2-3 times greater than our own. This is partly due to a different shape, but also the much denser concentration of rod and cone cells on the back of the eye. These are the cells that respond to light. The more densely packed they are, the greater is the resolving power of the eye.

In addition, the eagle eye has a much higher Flicker Fusion Frequency. This is the frequency at which an intermittent light source ceases to flicker and appears as a steady source. Above about 60Hz, the human eye can no longer distinguish individual movements and images blur together. However, in the golden eagle this frequency is much higher, allowing them to clearly detect and discern fast-moving prey.

While these birds are rated Least Concern on the international conservation status listing, and they are resident in the Alps, they are still a fairly lucky spot. In our next wildlife article, we will be taking a look at a far more common and easily seen bird: the Alpine Chough.