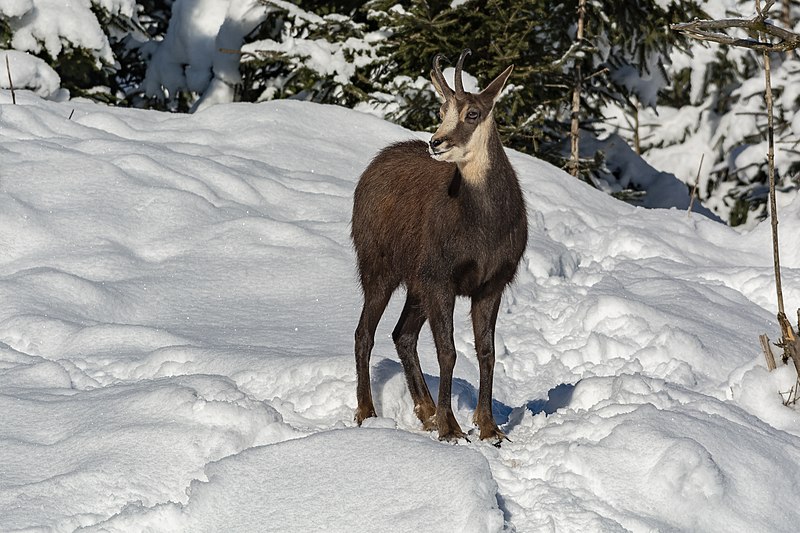 The Chamois is a species of goat-antelope found across the mountain ranges of Europe and Asia. Native to the Ecrins region is the Alpine Chamois – a small goat-like animal with a distinctive white and black striped face.

The Alpine Chamois is instantly recognisable by its black and white striped face. White side markings and a white stripe running down the length of its face contrast with black stripes coming down from the eyes. Over the rest of its body, the chamois’ fur is a dark brown colour in summer. In winter, longer protective hairs grow over the brown fur, giving it a dark grey or black coat.

An adult reaches 70-80cm in height, and up to 137cm in length. In the wild, they can live up to about 15 years, although in captivity their lifespan can reach 22 years. Both the male and female of the species have horns year-round. These tend to be short, reasonably straight and hook backwards at the ends.

Their weight can vary hugely, with anything from 25kg to 60kg being normal. Males tend to be heavier than females, but this difference is highly seasonal. Males put on more fat and muscle during the summer, resulting in them being up to 40% heavier than females of the same skeletal size by the autumn. However, during the winter, the males lose their excess mass and by the spring, they are only 4% heavier. It is thought that the increase in weight over the summer months is allows the males to achieve their largest size by the mating season, thereby giving them the best possible chance against their opponents. However, maintaining such a large weight over the winter is hard, and they use up their excess stores over the colder months.

Chamois are extremely well adapted to living in high rocky environments. They are endemic to mountain ranges across Europe and Asia. In 1907 they were introduced into New Zeland, as a gift from the Austrian Emperor Franz Joseph 1. Since then, they have thrived to the point where they are impacting New Zealand’s natural alpine ecosystem.

In the Alps, they tend to inhabit the high-altitude meadows above the treeline in the summer. They have been observed at altitudes above 3600m. During the winter months, they tend to migrate to lower altitude forests.

Females and males of the species live separately for most of the year, and only come together in the mating season. Females live in herds of up to 30, along with their young offspring. Once the young males are mature (at about three or four years of age), they are forced out of the herds and live solitary lives from then on. The mating season occurs in November, during which time mature males fight each other for females. These fights are violent, and the dominant male may kill any young male offspring still remaining with their mother in the herd.

After the mating season, the male leaves the herd. Chamois have a gestation period of about 170 days. In general, just a single calf is born. This is weaned at about 6 months, but stays with the herd for another couple of years until it is mature. In the event that a mother dies with a young calf, that calf is usually taken in and cared for by other females in the herd.

Chamois are ruminant herbivores, meaning they have four compartments to their stomachs (like cows). Food taken in during grazing is later regurgitated and re-chewed before being digested. In the summer, they feed mainly on grasses, flowers and herbs. In the winter their food sources are more limited. They eat moss, lichen and young pine shoots where available. However, they can fast for up to two weeks when there is no food, or if it is covered in deep snow.

These days, humans are one of the Chamois’ main predators. They are popular game meat, and their leather is extremely soft and absorbent. Chamois leather is often used for polishing because it doesn’t scratch. Before more modern materials became popular, a simple chamois leather was used as a pad in cycling shorts to prevent chaffing.

When threatened, chamois run fast, reaching speeds of 50 kph on rocky, uneven ground. They can jump almost 2m in height, and 6m in length. They have very keen eyesight, which they rely on sight for detecting predators. Their hoofs are adapted for climbing rocky terrain, and they will often nimbly escape to seemingly inaccessible caves and outcrops when in danger.

Females and males tend to show different reactions to potential danger such as wolves, lynx and other predators. Females are more likely to flee immediately with their young to higher, steeper ground. They will work together to protect the young in the herd. The males meanwhile, will often monitor the danger and only move if they feel threatened.

The chamois is extremely well adapted to its mountainous environment. It has a very efficient cardiovascular system, allowing it to function well at altitude. Its heart walls are thicker and it has a greater number of red blood cells than other animals of a similar size.

Its hoofs have several adaptations enabling it both to climb well, and walk well on snow and ice. The outer edge of the hoof is sharp and hard, allowing it to make use of tiny projections from rocks as it climbs. Meanwhile the sole of the hoof is rubbery, which prevents it slipping on steep rocks, or icy surfaces. In addition, the front of the hoof points slightly downwards, giving extra grip in the snow. The front hoof halves can spread to almost 90°, which helps with braking when it is running downhill.

Despite being relatively common in the Alps, Chamois can be difficult to spot. Their preference for inhospitable rocky environments, and their speed and agility when running from danger, mean it is unusual to come close to one on a walk. In our next Alpine Wildlife post, we will take a look at another common, but equally hard to spot alpine goat: the Bouquetin.