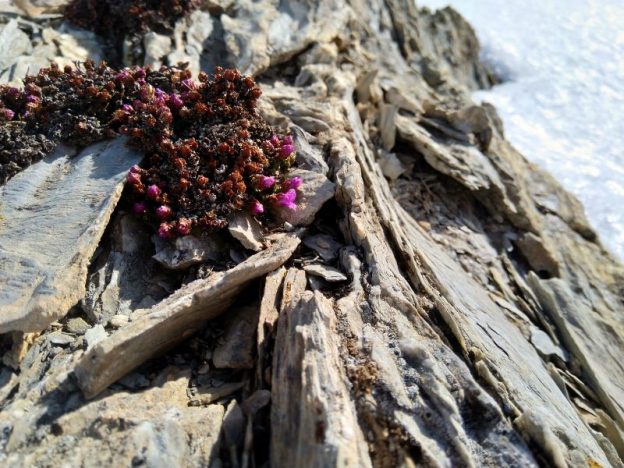 I’ve been meaning to write up some notes on Alpine wildflowers for a while. Seeing clumps of purple saxifrage flowering well above the snowline prompted me to start with this remarkably hardy flower. Naturalists have found it flowering at 4505m in Switzerland and at a latitude of 83° N. This makes it one of the highest flowering plants in Europe and one of the most northerly in the world. Consequently, it can count itself among a select group of Alpine flowers which survive above 4000 metres altitude.

Considering the above, seeing the purple flowers at a moderate 2500m altitude shouldn’t seem so surprising, despite the surrounding snow. Beyond the Alps, purple saxifrage grows in northern mountains and extreme northern regions in Europe and America. These include the Northern UK, Scandinavia and Canada.

I find the plant is most easily recognised by the opposing leaves that give it the oppositifolia tag in Latin. Similarly, the French and other foreign names also reference this characteristic. The small, grey-green leaves grow in neat rows of four. This gives a scaly, squarish appearance to the stalks. These small leaves help the plants to survive by storing water and reducing transpiration. Other survival techniques include its low-growing form which protects it from harsh weather. Finally, the ability to survive winters beneath a blanket of snow gives it both protection and moisture.

The plant grows up to about five centimetres tall, but it can spread over a wider area on the ground. In contrast to the tiny leaves, the purple flowers are comparatively large – a centimetre or more in diameter – with five petals and a darker centre. These flowers appear as the snow melts, which can be any time from April to August depending on the location. The plant only grows a few leaves each year, so examples like the photo above can be decades old.

Purple saxifrage is the territorial flower of the Nunavut territory in Northern Canada, where it plays an important part in the culture of the native Inuit people. This saxifrage flowers at the start of the caribou birthing season. The flowers themselves are eaten for their sweet taste. Inuit people also make a tea from the leaves and have often smoked the stems in pipes. The flower is also the county flower of Nordland in Norway (which includes the Lofoten islands) and of County Derry in Northern Ireland.

The Latin Genus name, Saxifraga, means rock breaker. These plants can grow on the most barren rock. Here, the roots literally break through stone in the search for water and nutrients. Many saxifrages make their homes in the high places of the Alps, on screes and barren rocky outcrops far above the tree line. Look out for purple saxifrage when you are hiking in and around the Ecrins national park.